I just finished up reading some of the old RfA archives, particularly the failed ones. This raised the question: Had I not made the speaking mistake in my most recent RfA (The thing about moving pages came out completely wrong, which was indeed my fault,) and the users that voted not used the "too many admins" argument, do you think it would've passed? Also, what do you think I, as a user, should focus on more if I am to post another RfA in the future? Thanks. Shotrocket6 Talk 18:17, January 12, 2011 (UTC)

User:Ariana Leonard vandalized the CODWAW page 3 times in a row... how you guys missed that is beyond me, but hey.

Can you tell me how to?

Thank you so much.

I feel it's a rather arbitrary rule for a community activity simply meant to encourage other editors. I've stricken my support for both Sactage and Sp3ctr3 130 Ki11er for now, because I don't support one user over another. Both deserve my support and recognition, so on my part it's all or nothing. bibliomaniac15 07:47, January 19, 2011 (UTC)

how do you do you get the templates to work?—Unsigned comment was added by Bassplayinmountianmexican

Could you delete this. Its only a redirect to a renamed file. elmo's

What is considered a main-space edit?

Thanks for quick responce!

This file has been released into the public domain by the copyright holder, its copyright has expired, or it is ineligible for copyright. This applies worldwide.

at the bottom of the page isn't enough? Maybe if people were a wee bit more clear on how to license images this wouldn't happen Dr. Feelgood 05:36, January 25, 2011 (UTC)

If olny I KNEW how to.

Why did you lock the Ascension page?

Some guy named SXesomething seems to have messed up the Abracadavre page... I edited it to add a new trivia and i was all done and it looked good, then when i checked back a minute ago the lyrics wherre all messed up and there was no separation between lyrics and trivia. You might want to revert that change?

Wanted to fix something to ascension

I looked at the changes summary and found one that was the same(Except the video's/photo's section)as before it go messed up. http://callofduty.wikia.com/index.php?title=Ascension&oldid=777420

Hey Whiskey35, I've been trying to change my Avatar Picture but no matter what I change it to, it always reverts back to what I used to have it. Can you help me? —Unsigned comment was added by VinnyBags26

Avatar Picture and your answer

It didn't work, but maybe I can try changing it to something else.

Can you help me with my slideshow/gallery? I want to have a gallery/slideshow and use an album from photobucket. Here is the link: http://s1200.photobucket.com/albums/bb332/William_Trueblood/. I want to make a feed or whatever for my gallery instead of uploading photos and then having them deleted because I didn't put a license. Thanks

http://callofduty.wikia.com/wiki/Brandon_Swift needs to be deleted.

Erm never mind CoD4 got it.

Here are some articles that need to be deleted.

I have a problem with Freenode. My dad comes home soon and he said he'll fix it. Cpl.Bohater

BTW Check the CVN channel am I still on the Blacklist?

Sorry I couldn't go on IRC it took me a long time to do a project and prepare for a test. I should be on tomorrow. Cpl.Bohater

I think you should decide on this: http://callofduty.wikia.com/index.php?title=Miscellaneous_Characters_%28Black_Ops%29&redirect=no

Looks like I'm the only one spamming you :p Oh crap, thats more spam :( Cpl.Bohater

Ban this dick and revert his edits.

http://callofduty.wikia.com/wiki/Talk:Personal_Computer please this article was deleted a long time ago.

Did you get that? Cpl.Bohater

Thanks, I've been clearing out the Wanted Pages and Uncategorized Pages like a Bot this weekend. Cpl.Bohater

Someone we have heard from before vandalized your userpage, twice. Cpl.Bohater

It appears to me that you have terminated it :p Cpl.Bohater

He did it again, he changed the crawler names for "Pukies" in the Kino der Toten page

Please put a warning on his talk page.-Diegox223 Talk

Oh, and thanks with the box problem, I thought it was a "Google Chrome" problem.-Diegox223 Talk

thanks and i love cod to so just sorry

How do I license them?

I herd u liek "Neurotically Yours"

I have to say this, you're one the most overqualified users for this award. You're one of the few users who actually spend their time performing various tasks that other editors wouldn't be bothered with. You definitely deserve more than a cluster of pixels above. You have completed many hard objectives that users wouldn't want to do. You're proof that you can get done with even the hardest task if you try. I, personally, am extremely thankful for your contributions and how much you care about this wiki. The wiki in general is honored to have you here as a sysop. You're what editors should be, a role-model, and a great user. This wiki would surely be far different from now if you weren't here. Congratulations on your awards. -- <choose><option>azuris_</option><option>

What is this, Pokemon? you have WAY too many medals! Congrats btw!

Re:Advising Posters to License Their Images.

Man you scared me out there...but can you tell me how to do the license thing ?
Thanks :)

Are you saying every image I uploaded can be deleted right now if it doesn't have a license. Do you know how many images on this wiki don't have licenses (Its alot). --

You should restore "Pukey" and rename it correctly. It has apparently been deleted. Chris blocked Taco so we don't need to worry about him calling it the worst name ever thought of. Bumblebeeprime09 Talk 00:03, March 4, 2011 (UTC)

RE: Advising Posters to License Their Images

So for the "Weaponry" sections on campaign missions, are weapons found in the level okay to put under it? in a separate section from starting weapons of course Dr. Feelgood 00:59, March 6, 2011 (UTC)

I don't know how to change the title of an Article, and it wasn't me the one who created it, I would like to change this article's name, because it contains erroneous information. Can you please help me to change it's name? Thanks.

Hey, WHISKEY. I have had to revert several of user:Butthead4's changes to the page Call of Duty: Black Ops Challenges. I have left a message on his Talk page regarding that page, and he continues to ignore me and makes more similarly bad edits. Please let me know if there is anything that can be done about this. I have put a TON of time into that page, and I would hate to see it destroyed because of users that have no consideration for capitalization, punctuation, and consistency within a page. Jako7286 01:53, March 7, 2011 (UTC)

You're obviously basing this on my comment. That's actually my first deleted comment. I was joking. But I forgot, joking or sarcasm isn't allowed on this wiki. I apologize, oh mighty ruler. KillerKing17 05:06, March 7, 2011 (UTC)

Try not to go TOO overboard when blocking people for creating more than one account, per COD:BITE. I'm sure Corey .D. Ryan didn't know he wasn't allowed to have more than one account, and he was probably just trying to rename himself, unaware of COD:SOCK. Template:Signatures/Sactage 18:19, March 7, 2011 (UTC)

User:Butthead4 is continuing to make bad edits to Call of Duty: Black Ops Challenges. Is it possible to block him from editing that page?

Don't worry Whisk, Azuris got him. --

Thanks, it's just that I have been told to avoid doing too many edits in a row and most of my edits on the Assassin's Creed wiki have been removed. But I think there is a learning curve and I am much better at it. Cryptar 10:38, March 8, 2011 (UTC)

Hi Whiskey, this guy (178.30.71.60) added a bit to the Wunderwaffe page which said something along the lines of 'The wunderwaffe is so sike it rapes :)' Of course we know that is not constructive, and needs to be dealt with. I left a massage on his talk page, but you should go talk to him.

Thanks for bringing to my attention the ownership-of-pictures-I-upload. However, while I have full permission from the places I take the pictures from, is there some sort of licencing process I have to go through for the photos? Or, is having permission enough? Mrmorozov987 00:26, March 10, 2011 (UTC)

I can't find a specific "Add Licence" button, but editing the page of the image, clicking "Insert Template", and selecting "Copyright Media" seems to work the same way. And that's it? Mrmorozov987 01:37, March 10, 2011 (UTC)

Thank you for the welcome letter

How i Properly Licence the Image? Please Answer,i sont want my Super Extreme High definition Extreme Quality Images to be Gone. ( LOL ) , And what should i put as Licence?

Ran a Checkuser and confirmed that the account was a sockpuppet of Taco Meat Yuck.

eh, I got worried, I was like, "oh shit, a tsunami is heading towards Hawaii...", but I then remembered you lived there, so I was freaking out my entire global history class. Template:Signatures/Sactage 15:21, March 13, 2011 (UTC)

Hello, I have no idea how to licenses images help me. --

Previously I uploaded a lot of Verruckt related images, I licensed them and gave them a reasonable name but they were deleted. Why? --

Thanks for the Help --

I just uploaded a image with a license but when I go to the page it does state that it has a license. I'am so confused. --

I swear to god you're magic because when I tried to license those images nothing came up but when you tried it, it worked perfectly. --

I'm sorry but when I extend the page, use the scroll bar to select a license and upload the image. The licensing doesn't appear on the page of the image. --

Would it be okay if I were to write the license where the caption would be ? Obviously the other way isn't working for me. --

When I click on the green cross (I tried both) it brings me to this page: 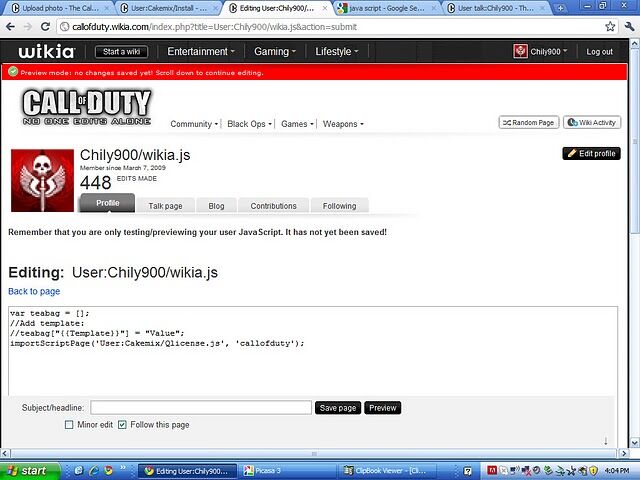 Is this supposed to happen.

Lol, take it easy bro, dunno how well it's manned, but I'll probably be rejoining the Night Patrol sometime around the end of May, after tests and shit. --Good editing! Darthkenobi0(talk) 23:24, March 13, 2011 (UTC)

Haha! Thanks man, means a lot. Mostly been taking screenshots lately. Not much actual editing but still trying to help out here and there. Good to see you again too, bro! --

This guy and this guy are quite obviously the same person, and this is probably just a minor mistake on his part, but I don't really know what to do about this. Nikolai Cannot Die 06:46, March 20, 2011 (UTC)

Re:Youre oppose on my RfB

There's really no point in correcting spelling, as they're going to be re-written soon enough. Major Blackout 07:19, March 21, 2011 (UTC)

Thank you so much

No problem. It served as a brief thirty second escape of procrastination from my schoolwork. I must say, though, the quality of vandalism has really gone down recently; all the vandalism attempts I've seen are all bland and unimaginative, although it's kind of a silly thing to complain about. At least in the past anti-vandalism duty was at worth a chuckle here or there. -Nogert 08:53, March 23, 2011 (UTC)

RE: i removed it

WHISKEY! You haz been heer liek for evar. It seemz liek this tiam last yeer u woz not heer. elmo's

PS, would it be a good idea to create a deletion template for videos that are unnecessary/montages, or would {{sdelete}} do instead? elmo's