When a duck swims on the water, you only see it glide...
This page requires a rework to conform to the Manual of Style. Do not hesitate to try and help!

A utility is a mechanism utilised in the Zombies series of gamemodes, Utilities are functions of a map that are interactable in a fashion to provide aid to a player at the cost of Points. Traps are a subsection of Utilities that directly damage zombies but in turn can directly down and even kill an unwitting player.

Utilities are often divided into multiple types, primarily that of mobility, defensive and supportive.

Introduced in Call of Duty: World at War on the map Nacht der Untoten, the Mystery Box has became one of the most reoccurring elements in all of the Zombies series, appearing not only in Treyarch devolved games but also Sledgehammer's Nazi Zombies, while both Exo Zombies and Infinite Warfare Zombies having derivates of it. The Mystery Box costs 950 Points within Treyarch games while costing 1,000 Jolts in Nazi Zombies.

Introduced originally as part of Verrückt in Call of Duty: World of War, the Power Switch introduced the "Power" mechanic to Zombies maps, a pre-requisite to accessing some, if not all important features of a map. This feature has reappeared in different fashions across the different gamemodes, such as most maps in Infinite Warfare utilising multiple Power Switches, with activating one providing power to an area rather than the full map. Activation of the power is often a pre-requirement for the Story Easter Eggs, as sections of them require interactions with machinery.

Unique to Origins, The six 115 Generators around the map act similar to the Power Switch, giving power to the area allowing the Perk-a-Cola Machines and various other resources to be utilised. However unlike the Power Switch, the 115 Generators must be brought to be activated and temporarily defended to fully activate alongside the fact that roaming hordes of Crusader Zombies can spawn can attack the generators, powering them down and forcing a reactivation. Alongside these, both the Mystery Box and the Pack-a-Punch Machine are powered by the 115 Generators in Origins, with the Pack-a-Punch Machine requiring all six Generators being active at once.

Sledgehammer changes the formula with Zombies by splitting how the Power works with Power Generators. Power Generators power a section of the map and award 100 Credits upon activation. However, they can be turned off by the effect of a Power Drain or during the second encounter against Patient Zero.

The Exo within Exo Zombies comes from the Exoskeleton gameplay that Call of Duty: Advanced Warfare centres around. However, every map of Exo Zombies starts the heroes off without the Exoskeleton. They must in turn find and power the Exo Suit Station to utilise the advance mobility that the exoskeleton offers alongside the Exo Upgrade system.

Within the Exo Zombies the Perk-a-Cola system has been replaced with the ability to upgrade the Exoskeleton with simple upgrades that enhance the function of the Exoskeleton. When a hero is downed, upgrades are gradually dependant on how long the hero remains downed.

Replacing the Mystery Box in Exo Zombies is the 3D Printer. While costing an additional 50 Credits, bringing the cost of use up to 1,000 per use, the 3D Printer functions nigh identically to the Mystery Box. It does also include a variant of the Fire Sale under the name of Power Surge.

Rather than a system similar to the Pack-a-Punch Machine, Exo Zombies features the Upgrade Station, which instead allows a weapon to be upgraded a total of 19 times with a 20th being locked behind the Story Easter Egg. Unlike Pack-a-Punch Upgrades, these upgrades are permanent for the match and will retain even if the weapon is swapped out. Each upgrade gains increased stats, a new camouflage and full ammunition refill while specific upgrade levels, dependant on the weapon will give attachments and additional reserve ammunition.

Within each of the maps of Exo Zombies, Decontamination Zones exist for rounds against the unique zombie type called Hosts. These zombies act as undead hosts for the Manticore bio-weapon, allowing it to infect living targets long after the the original attack. When a player is hit by a Host, they will become infested by the Manticore, starting a countdown of 60 seconds with additional hits by Hosts removing an additional 5 seconds. To cleanse the Manticore, the infected players must stand on the Decontamination Zone and activate it for 250 Credits, which will cleanse all players on it and give temporarily camouflage against the Zombies while putting the Decontamination Zone on cooldown for 10 seconds.

Broken credit terminals known as Credit Dispensers appear in Exo Zombies as a method to gain low amounts of credits, with random ones being active around the map, indicated by green screens. Every so often, Credit Dispensers can glitch out and produce much more credits, ranging from 600-1200.

As Exo Zombies functions as a continuation of Exo Survival, the Orbital Care Package returns from the mode albeit with some changes to make them more useful. As such, the Orbital Care Package now has a more limited selection of items including Credits, Remote Turrets, Aerial Assault Drone, Camouflage, Sentinel Reinforcements and a unique variant exclusive to Carrier that contains an XS1 Goliath suit.

Exclusive to the map Infection in Exo Zombies. The Camouflage Spray is installed into a section of the Sewers between the main the main Sewer section and the Burgertown. It is activated for 500 Credits at a terminal, which will cause mist sprayers installed into the ceiling to apply the Camouflague power-up.

Unique to Carrier. The Grenade Disposal Machine is a Pachinko inspired machine where the heroes can throw Grenades into the disposal slot, where it will drop down into one of the credit awarding platforms. Which it will award the hero that threw the grenade the credit amount and change how the disposal slot acts. Each disposed grenade within a singular round will made the disposal slot more difficult to precisely throw into, resetting upon the start of a new round.

Unique to Carrier. The Weapon Disposal Machine is as simple as the name implies, it allows the heroes to trade their currently equipped weapon for credits and other items that are required for the Flotsam & Jetsam story Easter Egg. It however requires a hidden Power Generator to be turned on to function. 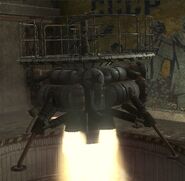 Wundersphere (seen in the background)