For other uses, see Rocket.

The V-2 Rocket was a ballistic missile used by the Germans to bomb targets during World War II. It holds distinction as being the world's first Ballistic Missile and the first man-made object to achieve Sub-Orbital Spaceflight.

The player is tasked with sabotaging a V-2 launch facility in the final mission for the British campaign. Explosives must be placed on all three rockets before the mission can be completed. At a certain point it is seen that the explosives could not destroy them completely, so the player has to go into a nearby bunker/station to fill up the gas tanks of the rockets with fuel to ensure their complete destruction.

During the final level, "Dragon's Teeth", the player is tasked with breaking through the Siegfried Line and eventually destroying several V2 rockets on their launch pads. When the V2s fall they destroy the German tanks advancing on the player.

The V-2 rockets are briefly mentioned in the Zombies map Der Riese, where the writing "V2" is found on chalkboard within the map. The chalkboards also appear in further installments of the game.

Lucas Gibson is charged with destroying one of them, leading him to be put in for the Distinguished Service Cross.

V-2 rockets appear in the level "Project Nova", and were going to be used to launch Nova-6 gas at capital cities such as Washington and Moscow. They were to be fired from the Nazi base in the Arctic Circle. However, because the British (according to Steiner) crippled the ship with their bombers, they could never launch the rockets. Though the SS were told to destroy the ship with explosives in the case they were attacked, the rockets remained live and plentiful in the wreckage due to charges never being set. After Dragovich and Kravchenko had betrayed Viktor Reznov and Dimitri Petrenko's squad, the British Commandos attacked the ship to receive the Nova-6 gas, allowing Reznov and his men to escape amidst the chaotic fighting between the British Commandos and Soviets, and successfully arm the charges previously set on the rockets. After fighting their way out of the ship, the charges exploded, successfully destroying the wreckage housing the Nova-6 gas and the V-2 rockets.

The player is tasked with stopping the German Armoured Train carrying V-2 Rockets which is on its way to the launch site in France, during the campaign mission S.O.E.

The V-2 Rockets also appear in Multiplayer as a hidden killstreak. After a countdown of 10 seconds, it kills all enemy players in the map at the moment. Unlike Tactical Nukes, it doesn't end the match after detonating on the map. The player will obtain the V-2 Rocket once they reach 25 kills without dying, assuming they meet the prerequisite of at least reaching prestige 1 in all 5 original divisions (Infantry, Airborne, Armored, Mountain, Expeditionary).

The V-2 Rocket returns in the Care Package in the Infected game mode added with the Attack of the Undead event. Multiple V-2 Rockets can be obtained, but only one can be called in at a time with a 30-second cooldown in between.

The V-2 Rocket serves as the game-ending killstreak, unlocked by obtaining 25 kills with weapons without dying (Or buying it with $25,000 in the Champion Hill gamemode). It's function and unlock requirements are very similar to that of the Tactical Nuke from previous Call of Duty games. 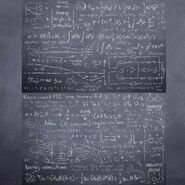 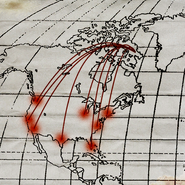 V-2 launch map, showing what cities the Germans were going to target. 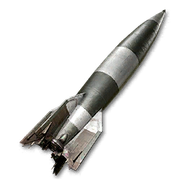 The icon of the V2 Rocket scorestreak. 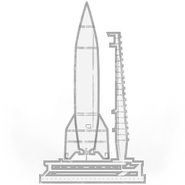