Call of Duty Wiki
Register
Don't have an account?
Sign In
Advertisement
in: Call of Duty: Black Ops Wonder Weapons

The V-R11 is a Wonder Weapon that appears in Call of Duty: Black Ops. It debuted in the Zombies map Call of the Dead and is currently exclusive to it. It also plays a key role in the map's main Easter Egg.

The V-R11 is unique by wonder weapon standards. When a zombie is hit by one of the V-R11's beams, it will turn into a normal human. The human will be chased around by zombies, and he will scream while he is alive. He will run away from the zombies, heading towards the closest body of water and attempting to use the shortest route possible, freezing himself to death. Since he attracts zombies, he may be utilized similarly to a Zombie Blood, but the zombies will only chase him if he is the closest person to them. If another player is closer, the zombies will go after that player instead, effectively wasting some of the V-R11's scarce ammunition. If the player is at the correct stage of the Original Characters Trapped Easter Egg, then he will run to the base of the lighthouse instead. Because the human being will run to the water, the weapon is more effective the farther away the player uses it from the closest pool of water (the top of the lighthouse being a good example). Its is also unusually accurate when firing from the hip, often nullifying the need to aim at all.

The player can also shoot another player with the V-R11 or V-R11 Lazarus, giving them a red-tinted screen and having zombies ignore them, letting them revive other players without interference. The V-R11 Lazarus adds a temporary insta-kill to this effect. This effect also stacks, so one can be invincible for a few minutes if one were to use up all their ammo for the V-R11 on a teammate. The player appears to have green or red lightning coming out of his body, like George Romero, except different colored. The effect lasts longer when applied by the V-R11 Lazarus.

The V-R11 will also put George A. Romero into his "calm" state when he is angered and will anger him if he is calm. He will automatically be angered again after 10 to 15 seconds if he was calmed down with the V-R11. Players should use this time to escape or move into a body of water.

Due to the V-R11's nature, it is best used in a supporting role with other players. As it can give other players an insta-kill based effect, it can easily be used to clear hordes, as players under the V-R11's influence can easily wipe out hoards of zombies with great ease with automatic weapons, such as an assault rifle or light machine gun. It can also be very useful if the player wishes not to deal with George A. Romero, as a single shot from the weapon can either calm him down, or banish him for the round. However, some players will prefer killing him in order to obtain the Random Perk Bottle and the Death Machine/Wunderwaffe DG-2. The V-R11 is fairly ineffective in Solo games, where the player cannot shoot other players in order to give them insta-kill effects, and it mainly serves the purpose of calming down George A. Romero.

First-person view of the VR-11.

A picture of the weapon firing.

The weapon turning a Zombie back to its human state.

A zombie after getting killed by V-R11.

A human frozen in ice. 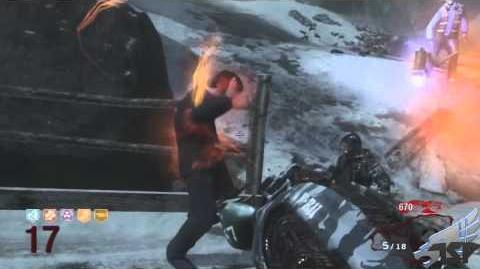