For the weapon with the same name, see V-2 Rocket.

V2 is a small map in Call of Duty: WWII. It is part of the second DLC pack The War Machine taking the fight to a German rocket facility.

Mostly outdoors with few indoor passageways. V2 Rocket itself is the main attraction with a lot of friendlies or oppositions attempting to control the area.

Tallest and active structure. There are multiple ways to enter the rocket holder. Through the North and South Pit leading the Blast Pit, a ladder can be climbed to the rocket's ground floor. Ground floor itself has entrances from both Transport Lot and Train Terminal. From there, a stair case reaches to the holder's platform. Other conventional ways to enter the platform is by either using the available stair case from the Transport Lot or hopping unto the hanging rocket shuttle from the Train Terminal jumping to the opening. 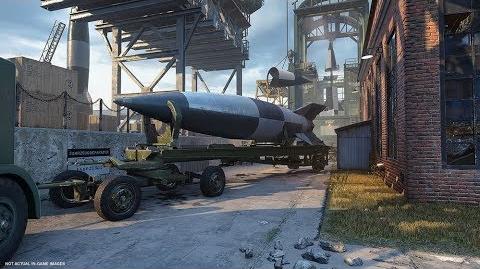 Retrieved from "https://callofduty.fandom.com/wiki/V2_(map)?oldid=2448771"
Community content is available under CC-BY-SA unless otherwise noted.