The VAPR-XKG is an assault rifle featured in Call of Duty: Black Ops 4. The weapon currently has a MKII variant that is obtainable from Reserve Cases, and a Mastercraft variant known as the Vampire Hunter that is purchasable for CODPoints in the Black Market.

The VAPR-XKG is available in Zombies as a wall weapon for 1550 points and as a weapon within the Mystery Box for 950 points. When upgraded via the Pack-a-Punch Machine, it becomes the Creepng Haze with the magazine size increased to 50 rounds and its ammo reserve increased to 400.

VAPR-XKG in the first person view. 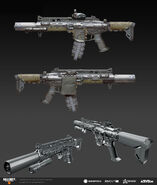 VAPR-XKG concept art by Rick Zeng. Note how it was originally designed to have a built-in suppressor.