The VPR (known as Hades in pre-release) is a Kendall Ballistics fully-automatic double barreled submachine gun featured in Call of Duty: Infinite Warfare that was added in the March 28th, 2017 update. It looks similar to the MP5K from previous games in many ways, such as the iron sights and silhouette of the weapon, though the weapon now has two barrels and differently mounted magazines.

It is available for free for Season Pass holders, otherwise it can be unlocked via a challenge or a Supply Drop (acquire any variant).

The VPR was the first post-release DLC SMG added to the game, and can be used at any level (even directly after prestiging) provided the player has completed the challenge required to unlock the gun, has the season pass, or has unlocked a variant through a supply drop. The VPR has several downsides. The description is misleading - the gun actually reloads very slowly for an SMG - making Dexterity a must if the player is going to be agressive with it. Although the recoil of the weapon is moderate, the centerspeed is low, meaning that the weapon kicks up during firing but doesn't return down quickly, meaning the overall recoil is high, meaning Foregrip is also a good choice for this weapon, or tap firing at range (pausing to take shots in order to allow the weapon to stay on target). The weapon also has poor range, meaning outside of close range the weapon will have a slightly below average time-to-kill (although it's still fairly quick). Finally, the individual damage per shot is very low, at best a pitiful 18 damage, and there is a slight spread to the bullets being fired, meaning the weapon can be inconsistent at times, not to mention that the recoil is even worse whilst hipfiring.

However, there are several redeeming qualities. Firstly, the weapon has an extremely high rate of fire, over 1200 RPM in fact. To balance this out, the 2 bullets that are fired per trigger pull have very low damage. However, when they both hit, they deal above-average damage, at 36 (3 trigger pulls, or technically 6 shots to kill), meaning that with perfect accuracy this is one of the fastest killing guns in the game. As well, the iron sights are clean, meaning that in the useful range of the VPR, no sights are necessary. The hipfire spread of the VPR was also best-in-class, as a patch increased its vertical recoil while hipfiring significantly , hindering hipfiring at long ranges. For consistency's sake, aiming down sights is recommended over hipfiring. The weapon also has the usual SMG benefits, such as being tied with the Shotguns as having the best handling statistics of the primary weapons. With the poor range, Suppressor has little harm on the weapon's effectiveness, making it an excellent choice on this weapon. Due to the rapid rate of fire, Extended Mags would also be a recommended choice.

Previously, all variants for the VPR are currently only available from the quarter master collection. As of 22nd December 2017 , the VPR and Trencher were moved to the Prototype Lab , allowing the base 4 variants to be crafted with salvage.

The Common Sting variant receives the Stockpile gun perk, which allows for more reserve ammo and a larger magazine capacity of 43 rounds. When extended mags are used it gets 64 rounds per magazine, surpassing the capacity of most submachine guns.

The Rare Irascible variant brings the Deathbringer gun perk and Low Rider gun perk to the table. Deathbringer allows the variant to instantly reload when double kills with the weapon are achieved (taking bullets from reserves), useful given the large magazine size, high damage output, and short range of the weapon meaning that the weapon is well suited to achieving consecutive kills. The common gun perk, Low Rider, allows the weapon to have reduced spread during sliding, allowing for a longer range for where hip fire is effective.

The Legendary Wrath variant has the Refresher gun perk and the Steady gun perk. This variant is geared towards aggressive usage - Refresher allows for the user to refill their equipment after five kill gun streaks (allowing one to refill their lethal and/or tactical grenades alongside or without the Resupply trait), fitting well into multiple playstyles. The second gun perk is also geared towards aggressive usage - reducing the hip fire spread of the weapon, allowing one to spray.

The Epic Yokai variant is equipped with the unique Assassin Build gun perk and the Creeper gun perk. The epic trait of the Yokai gives a permanently attached Suppressor that also removes the death icon of players killed with this weapon, allowing for an especially stealthy weapon. To balance this, the range of the weapon is automatically reduced, however, this can be partially negated by using the Rifled Barrel attachment. Because of the epic trait, the VPR - Yokai is especially well suited to modes where stealth is preferred, such as Search and Destroy. The common gun perk of this weapon simply increases the weapon's crouched movement speed. It is interesting to note that this variant receives multiple visual changes - mainly the integrated suppressor - but the weapon also sports a dark green camouflage, the Kendall Ballistics logo near the newly added stock this variant has, and the removal of the visual-only Foregrip.

The VPR was added to the Magic Wheel in Zombies in Spaceland, Rave in the Redwoods, Shaolin Shuffle and Attack of the Radioactive Thing. In The Beast from Beyond, it is a wall weapon in the theatre, costing $1250.  Like the previous DLC weapons added to the game, the VPR can be unlocked for customization by obtaining it from the Magic Wheel or owning the Season Pass.

The VPR has a special trait no other weapon shares: every bullet from its dual barrels counts as a separate hit, and as such, any hits made with the VPR earn double money at 20 points per trigger pull. Also, when unpacked, buying Bang Bangs doubles the VPR's ammo, from a default 20 rounds to 40. Losing Bang Bangs has the opposite effect.

The VPR has a combination of a good damage model, high fire rate, low recoil and decent mag size, being a very attractive weapon in many scenarios. The VPR can easily carry the player to scene 20 without upgrading or buying Bang Bangs. Ammo is somewhat plentiful, although going full auto all the time may result in having to upgrade early. Generally the ammo should last about 2-3 scenes. Reloads are slightly below average speed, and the player won't be caught reloading most of the time.

As of a patch, the VPR's hipfire recoil was increased significantly, and as such should be limited to point blank situations, or can be viable with the perk Deadeye Dewdrops.

The VPR in first person 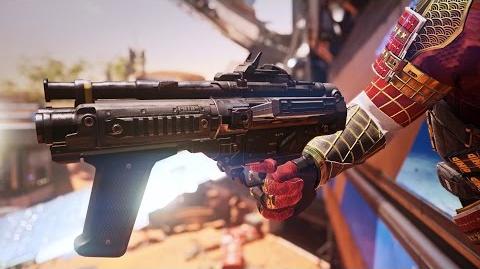