Vacant is a small map that is set in an abandoned office building in Pripyat, Ukraine in Call of Duty 4: Modern Warfare and in Port of Verdansk in Modern Warfare. The main building contains various pieces of office equipment, cubicles, and random debris lying around. Attached to the main building is a warehouse, which connects to the main office area. Outside one can find multiple destroyed vehicles, abandoned shipping containers, and a large oil tank. The map caters to multiple play styles. Most of the map plays host to intense close-quarter battles, due to most of the map's area composing of indoor areas. The outdoor areas usually serve as flanking positions but contain more long-range combat. Also at each corner of the map, there are overviews of the city.

Vacant appears in Old School Mode as a supported map. It features a total of 12 sprites.

The Chernobyl Nuclear Power Plant in the Modern Warfare 2 version.

Overhead view of the map. 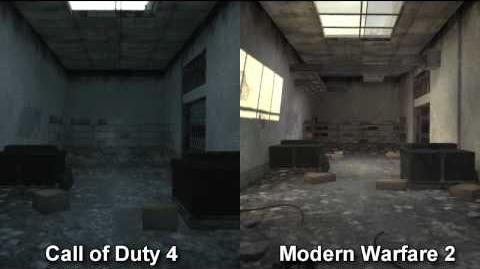