For the A-10 pilot in Call of Duty: Modern Warfare 3, see Valkyrie 2-6.
For the song with the same name as this weapon's original name, see Archangel.

The Valkyrie Rocket is a shoulder-launched rocket that the player fires from a launcher and then guides toward a target of their choosing, but is much harder to steer than an RC-XD, since the RC-XD can go forwards and backwards and even stop.

The launched rocket can fly for 15 seconds, or for five seconds when boosted. It can explode anywhere the player wants it to. Attempting to steer the rocket upwards into the sky then diving it down works in some cases, however the player must keep in mind not to go too high, as the controller signal is limited: when a rocket is out of range, the player loses vision and control of rocket, and the rocket explodes.

The rocket can be detonated in-flight by pressing the fire button. Although this may seem a waste, it is useful for when the rocket is about to pass by a player but does not have the time to turn.

The Valkyrie is used two times during the campaign:

Upon getting a seven killstreak, the player is given an airdrop marker which will summon a transport helicopter to drop a package containing the launcher and two rockets. Unlike the SAM Turret and Sentry Gun, which also must specifically be air dropped to the player, it is not specifically announced that the Care Package being dropped is a Valkyrie Rocket, instead being described as just a Care Package. Once fired, it is deployed, and announcers will announce the presence of the Valkyrie Rocket.

the Valkyrie cannot brake or reverse but can be given a speed boost. Striking walls or other physical objects will cause the rocket to explode, usually resulting in no kills unless a target is within the blast radius. Pressing the button corresponding to the player's shoot button will detonate the Valkyrie, allowing for controlled mid-air detonation. The Valkyrie Rockets serve a similar role to an RC-XD, but the Valkyries have much more movement potential since they can fly over obstacles instead of needing to drive around them, like with the RC-XD. Valkyries can also be flown over large structures, allowing for very quick transport to specific points on the map. Valkyrie Rockets also tend to be more reliable against Flak Jacket users, killing them with more regularity than the RC-XD, which needs to be as close as physically possible in order to score a kill against an uninjured Flak Jacket user.

The Valkyrie Rocket can also be utilized to shoot down some aircraft or used as an anti-personnel weapon. Without the speed boost initiated, the missile travels rather slowly, requiring a significant amount of time to reach the altitude of Spy Planes. Valkyrie Rockets can be shot out of the air by gunfire, and can be locked on and fired at by fast-moving Strela-3 missiles or the more cumbersome M72 LAW rocket. If the operator switches weapons or is killed while operating it, the Valkyrie will be lost.

It is relatively unpopular online, as it is both difficult to control, and it is unlikely to get more than two kills, even though it is a seven killstreak. A poor connection also badly affects the Valkyrie Rocket, as the Valkyrie Rocket moves on its own, unlike the RC-XD, meaning that it can potentially collide with a surface unintentionally. It also requires summoning via a Care Package, which can result in the user getting killed and the package being stolen, or worse, booby trapped. The user also cannot perform other actions when the Valkyrie Launcher is out, as switching to a weapon causes the launcher to be lost. Overall, the Valkyrie Rockets usually have far too many limitations and risks associated with them to be worth making it a player's seven killstreak reward. For comparison, the Attack Helicopter also requires seven kills to earn. All the player has to do is designate a starting point for the Attack Helicopter to go to, and the Attack Helicopter goes to work on its own, needing no further action by the user. The RC-XD, while inferior, serves a very similar role to the Rockets, does not need to be summoned via Care Package, is not as prone to user error since it doesn't automatically detonate upon striking a wall or the ground, and is a mere 3 killstreak.

A particular operational tactic is to both treat and fly the rocket as if it were a Predator Missile, launching the missile into the air until it reaches an optimum altitude before angling back towards the ground, allowing a better visual of the entire map, obstructions and enemies. Bear in mind that this tactic may be difficult to perform effectively due to the fact the missile is cumbersome to control, is limited on fuel and the user may lose a sense of direction for a brief period of time.

Although uncommon, it's possible to lock-on to and shoot down Valkyrie Rockets; however, due to the speed of the rocket and the unlikelihood of any major kills, it is not something one should worry about if using the killstreak. However, try to stay out of the path of enemy SAM Turrets, as it will lock-on to and shoot the Valkyrie down.

The sights of the Valkyrie Rockets 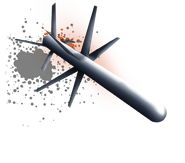 The Valkyrie Rockets seen from Call of Duty ELITE 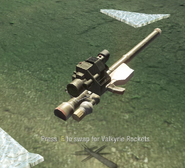 A glitched 'dropped' Valkyrie Rocket launcher on the ground including pick-up icon in Multiplayer.

The Valkyrie Launcher returns in the campaign level "Pyrrhic Victory", being used by Mason to shoot down a Hind. Unlike other usable weapons in Black Ops II, it is not available in the customizable loadout. It should be noted that the Valkyrie Launcher can take up to 3 shots to destroy the Mi-24 Hind, unlike in previous games where it was one shot.