The Variable Zoom can be found on all sniper rifles, the Crossbow, and the G11, with three levels of zoom. Levels of zoom can be chosen by pressing the melee button while scoped in. Also, the level of zoom does not change after zooming out of the scope or switching weapons, only if the player drops the weapon.

The Variable Zoom is available for the G11 and Sniper Rifles, but not the Crossbow, unlike in campaign. Other than that, the scope behaves the same. The low zoom can help the player engage closer targets, while the highest zoom level is more than the default sniper scope, which can help the player engage targets at extreme ranges. The variable zoom scope does not bounce as much on the initial zoom in as the regular scope, as it is zoomed in less. For this reason it is favored more for "Quick Scoping".

It's also slightly bugged in split-screen play. The second level of zoom goes much farther than it should, which makes the third level zoom only a foot further or so.

The Variable Zoom scope is also available in zombies, when either the Dragunov, L96A1, or Scavenger are Pack-A-Punched.

The Variable Zoom seen from Call of Duty ELITE

Dragunov with the Variable Zoom

WA2000 with the Variable Zoom

L96A1 with the Variable Zoom

PSG1 with the Variable Zoom

G11 with the Variable Zoom
Add a photo to this gallery

The Variable Zoom returns in Call of Duty: Modern Warfare 3. It was first seen in the Multiplayer World Reveal on a Dragunov as a player's secondary weapon. It was then seen equipped on the AS50 at COD XP, it is known as the "Variable Zoom Scope". The scope has three different zoom levels, a 2.4x zoom, a 4.8x zoom and a 9.6x zoom. It is unlocked exclusively for Sniper Rifles at Weapon Proficiency Level 22.

The Variable Zoom returns in Call of Duty: Black Ops II. It is an attachment for the sniper rifles, light machine guns, and the Crossbow. It now has only two levels of magnification unlike the previous ones. The attachment can be combined with the Dual Band Scope to create a hybrid optic. 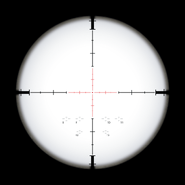 Scope Reticle.
Add a photo to this gallery

Retrieved from "https://callofduty.fandom.com/wiki/Variable_Zoom?oldid=1844284"
Community content is available under CC-BY-SA unless otherwise noted.