For other characters, see Zukov and Vasily.

Alena Vorshevsky: "I don't like him."
Boris Vorshevsky: "No one does, that's why he is good at his job."
— Alena and Boris in "Turbulence".

He was a close advisor to President Vorshevsky and serves in his cabinet, meeting with him on his flight to Hamburg to negotiate peace with NATO. He is described by the President as being a man that nobody likes on a personal level, but this lack of personable traits makes him all the more effective at whatever job he was assigned to. Vasili appeared to be a high-ranking member of an extremist group within the Ultranationalist Party during their reign over Russia.

During the flight, he was actively opposed to peace with the West, believing that appeasing their enemies was ultimately a mistake. During his debate with the President, the plane was suddenly attacked by the Inner Circle in an attempt to hijack it and kidnap the President. The meeting room was breached with a charge and in the brief confrontation that occurred in the room that killed most of Vorshevsky's cabinet, Vasili was the only surviving cabinet member with a wounded arm.

Later, after the plane had crashed, Vasili remained with the President and his escort as they awaited rescue by helicopter. Commander Pudovkin and Agent Harkov eventually arrived in time to escort them to the landing Mi-8 helicopter, Harkov opening the door to reveal Vladimir Makarov waiting within. Inner Circle members sprung out in ambush and Harkov was shot, Pudovkin and Vorshevsky's escort killed. Vasili attempted to run away but he is most likely shot in the back and killed too. 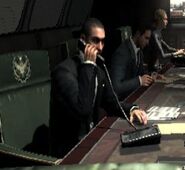 Vasili before the meeting.

Vasili covering against a wall. 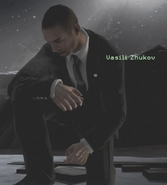 Vasili after the plane crash.
Add a photo to this gallery

Retrieved from "https://callofduty.fandom.com/wiki/Vasili_Zhukov?oldid=2585884"
Community content is available under CC-BY-SA unless otherwise noted.