For the character in Call of Duty Online, see Alberto Vasquez.

Khaled Al-Asad with a nuclear bomb (on Vladimir Makarov's orders)

Lieutenant Vasquez was in charge of Sergeant Paul Jackson's 1st Force Reconnaissance platoon during the American-Middle Eastern war missions in Call of Duty 4: Modern Warfare and Call of Duty: Modern Warfare Remastered. He is easily recognized by his large stature, deep voice and plain helmet, featuring several tally signs and the number 28.

He seemingly has years of experience in battlefield reconnaissance-tactics and direct action capability. He is a skilled Marine, as seen in his numerous engagements. He leads the entire squad on most if not all missions. He carries more equipment than the other Marines and is noticeably bulkier. He always uses an M16A4 with an M203 grenade launcher attachment. He is also always carrying a special W1200 shotgun with no stock on his back though he never uses it and it is never available to the player (this is presumably a breaching shotgun). He is killed in the nuclear explosion while evacuating in a transport helicopter in the mission "Shock and Awe", although his corpse can be identified during "Aftermath".

Vasquez was a distinguished Marine during the war in the Middle East, and first appeared briefing his platoon on the seizure of Al-Asad. He fast-roped down from the Black Hawk helicopter and approached the target building with Private Massey. After clearing the building, Vasquez reported to HQ and received new orders. Leading his platoon through the TV studio, he regrouped with SSgt. Griggs and his squad, and cleared the broadcasting room.

Rescue and escort of War Pig

"Bravo Six we have an Abrams dead in the water. Callsign "War Pig". Lt. Vasquez, your unit is shotgun, over."
— Command

Vasquez led his men to the aid of War Pig, caught in a bog inside the city. When ambushed, Vasquez immediately made quick orders to save his men, suppressing the building's gunners from the streets and dispatching Sergeant Jackson and Private Roycewicz to clear the building. After clearing the building, Vasquez ordered Private West (and later, Jackson) to neutralize tanks in order to reach Alpha Company and War Pig. After Reaching the bog and defending War Pig for some time Vasquez deployed Jackson to neutralize a ZPU and allow air support to clear out opposition. He then planned for the protection of the exposed site until War Pig could be brought back into commission.

Vasquez evidently took command of the remains of Alpha Six and led War Pig, in addition to his unit, on the path through the city. While in the city the unit runs into heavy resistance from the OpFor. After they fought through the city, which includes the destruction of an OpFor T-72 tank, his squad was picked up by a Sea Knight and taken in pursuit of Al-Asad.

"Rolling in with everything we've got"

Vasquez's men remained aboard Outlaw-Two-Five until they were deployed to rescue a forward reconnaissance team that had been pinned down. His men were successful, and they withdrew aboard Outlaw-Two-Five. As they made to flee the city in anticipation of a nuclear explosion, Deadly Pelayo was shot down by a Stinger. Vasquez and his men quickly ran to her rescue. After she was safely retrieved, Vasquez and his men pulled back into the Sea Knight and continued their escape, but a nuclear blast went off. Vasquez roared a warning to his team.

Paul Jackson initially survived the impact of the crash, and managed to find the bodies of Pelayo, Vasquez, and several of his fellow Marines before he died himself. It is presumed that he was among the 30,000 victims considering the fates of all of those aboard his helicopter. His death along with the other soldiers and civilians caught in the blast was one of the reasons that drove General Shepherd to start the Third World War.

In the remastered version, Vasquez initially survived the crash, only to then collapse in front of Jackson and die.

A Marine and Vasquez run through the streets. 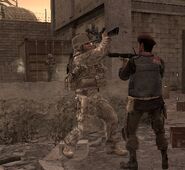 Vasquez aiming and ready to fire. 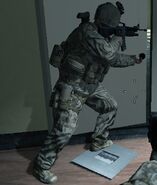