"You were killed by an exploding vehicle. Cars on fire are likely to explode."
— Death Message in Call of Duty 4: Modern Warfare

Vehicles are static, destroyable objects in the Call of Duty series.

Cars are environmental objects on the various multiplayer maps and single-player levels in the Call of Duty series. They can either take the form of civilian cars (Call of Duty 4: Modern Warfare and Call of Duty: Modern Warfare 2) or trucks (Call of Duty: World at War). Cars are littered across the maps (usually on the streets) and can easily be destroyed with explosives, light machine guns, etc. When cars sustain enough damage, they will catch on fire. Cars on fire will sustain constant damage until it explodes. This puts the player at great risk whenever they decide to hide behind a vehicle and can cause great frustration, especially if they were killed in either the multiplayer or singleplayer levels due to this.

Not all cars are stationary objects. One exception is the car the player is in, in the Call of Duty 4: Modern Warfare level "The Coup". Another exception is the car seen in the Call of Duty: World at War level "Vendetta", in which Heinrich Amsel rides in at the start and at the end when Reznov and Dimitri attempt to kill him. Gary "Roach" Sanderson and Joseph Allen ride in two different cars in Call of Duty: Modern Warfare 2 as well, while several civilian cars driven by Brazilian citizens and gangs in "Takedown" and in Exodus a civilian can be see crashing his car. Even in Call of Duty, there was a mission in which the protagonist has to escape a tank by driving a car.

In Multiplayer, the last player to damage the car gets any kills from it. Therefore allies are unaffected by explosions from cars as long as the player shoots them last. Likewise, in hardcore they may incur teamkills for no apparent reason if they leave flaming cars around. Kills by cars do not count towards the Danger Close Pro challenges. Here is a list of Multiplayer levels containing destroyable cars.

A Shadow Company SUV (note its name is "Vioxy").

Icon for being ran over by a Jeep in United Offensive. Amusingly called "jeep_crunchy" within the files.

Icon for being ran over by a Tank in United Offensive. Amusingly called "tank_crunchy" within the files.

Large vehicles, such as this bus from Modern Warfare 3, do not explode and are more a scenery prop than an environmental hazard.

Example of a vehicle exploding.

A fictional Birosh Turbo, Type C, made by Alton Brixtan, on the map Gauntlet

A Birosh Turbo police variant with wheel spats, on the map Metro

A fictional Crandall TE truck made by Bridgeport, on the map Gauntlet

Horch 1a in World At War

Opel Blitz in World At War 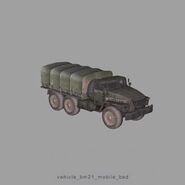 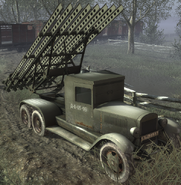 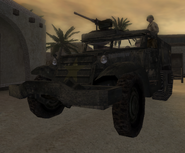 M3 Halftrack in Big Red One 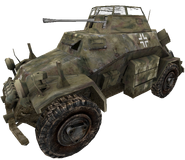 Metropolitan Police car in MW3 (based on the Volvo V70) 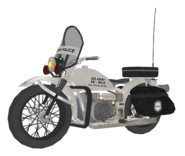 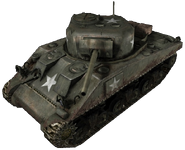 Civilian car tailing the car that Al-Fulani is being transported in.

Pileup of cars in MW3

ZIS-6 in World At War

Model 94 in World At War 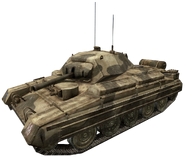 Bottom Feeder in The Defector (an M113 APC)

Charity Worldwide truck in MW3. Note the name is Wigwam,

Nuketown Tour Bus in Black Ops 2, with the Wide Load moving truck next to it.

Jeep Wrangler model in Modern Warfare 3. Note that the model is in a silver color scheme. 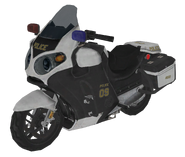 A6M Zero in World At War