The Venom-X is a special projectile weapon that shoots either acid puddles, fire (Venom-FX), lightning (Venom-LX) or friendly Seeder turrets (Venom-SX), introduced in the Onslaught DLC for Call of Duty: Ghosts, being featured in the Nightfall, Mayday, and Awakening chapters of Extinction. It also appears as an easter egg in the Unearthed map included in the Devastation DLC.

The Venom-X later returns in the Call of Duty: Infinite Warfare zombies map The Beast From Beyond and later was added to multiplayer as part of the September 26th, 2017 update.

To obtain it in the map "Unearthed", three black boxes on a crane must be destroyed using explosives, which will cause the box on the end of the crane to fall. Once on the ground, the player can climb into it and pick up the Venom-X. The weapon does not replace any of the players current weapons, meaning that it can act as a "third weapon". It features a ten round magazine. Once picked up, the Venom-X will not respawn, which means it can only be obtained once per game.

While holding the Venom-X, it is not possible to collect Care Packages. Furthermore, when knifing an enemy, the player just swings their knife instead of lunging it into them.

When first acquired, the Venom-X will have four rounds total, two loaded and two in reserve. The Venom-X cannot be reloaded mid-magazine; both projectiles in the magazine must be shot before the Venom-X can be reloaded. The Venom-X does not have an aim down sight function. Trying to aim down the sight instead triggers the explosive's detonation.

To obtain ammunition for this weapon, players must kill Cryptids and collect the eggs that appear. Eggs appear randomly after a Cryptid is defeated, and the ammo must be acquired by holding the action button when hovering over the egg, similarly to retrieving a launched Ballistic Knife or Tomahawk in earlier games. Eggs have a high tendency of appearing on the first Cryptid killed during a sequence. An egg can refill up to two shots in reserve, and will refill the Venom-X's magazine should it be partially or fully empty. A single egg can give up to four shots to a single player, should the player have no ammo, or have the Venom-X set up in a way that it has an empty magazine but two shots in reserve.

In-game, it has handling similar to that of a grenade launcher, as players shoot it first and detonate it when necessary. The resulting explosion does enormous damage, as well as leaving a cloud of corrosive gas that lingers and does damage over time, much like the gas clouds left by Scorpion attacks. The projectiles of the Venom-X travel in a parabolic arc, so users might need to aim above their intended target for the projectile to reach its mark, especially if the target is at elevation.

Players should never interact with Search Piles while having the Venom-X as the active weapon, as this can result in the search pile returning anything, including useless attachments and, dangerously, special ammo types that do not correspond with the user's current special ammo type. It is best to switch to have another weapon as the active weapon while interacting with Search Piles.

The Venom-X is an extremely effective weapon, capable of netting an easy one shot kill on anything weaker than a Phantom. It does heavy damage to Phantoms and Rhinos, but two shots is not enough to kill them. Two shots will do severe enough damage to them that they will need minimal follow-up damage to kill, so it is still worthwhile to use the Venom-X against these targets to deal huge burst damage. The Venom-X's lack of reliance on teammates providing ammo - since ammo for the Venom-X is supplied entirely separately from other weapons - makes the Venom-X useful should the user be caught in a bind, low on ammo and money, especially if the user is capable of retrieving eggs constantly. The lingering effects of certain Venom-X variants can also make the Venom-X devastating as a spawn trapping weapon, with Cryptids constantly spawning into lingering damage effects if set up right.

The Venom-X is affected by Limited Ammo, and its effectiveness is severely hindered as a result. The Venom-X only gives two shots total, one loaded and one in reserve, when first received with Limited Ammo active, and collected eggs will give less ammo when Limited Ammo is active. Users should consider not using the Limited Ammo relic on a map that allows players to get the Venom-X. The Venom-X's reload speed and switch speeds are hastened when using a sufficiently upgraded Weapon Specialist, but those are the only benefits it receives from the class, so users aren't missing out on much if they forego the Weapon Specialist. Players that are using Pistols Only will not be able to take the Venom-X at all.

In Nightfall, the Venom-X is found in the middle room of the Facility after destroying the hive blocking the room inside. There is no actual costs for the Venom-X, so every player will be able to have one without spending money. It doesn't take a weapon slot. Like the stowed Riot Shield, the Venom-X's weapon slot is allocated after the primary weapon(s) and before the user's pistol.

In Mayday, it functions the same as in Nightfall, but can be altered into three different variants. There are three parts to upgrade the Venom-X. The variants are determined by what Biolum the builder acquires, which can be one of four kinds. Regular Biolum returns the regular Venom-X. Orange Biolum returns the Venom-FX, which creates a lingering fire pool that lasts longer and sets Cryptids on fire, although the lingering fire pool can hurt the user. Blue Biolum returns the Venom-LX, which spawns a lightning orb after detonation, which zaps Cryptids who walk in it, and poses no threat to the user's own health. Amethyst Biolum returns the Venom-SX, which spawns friendly Seeder turrets that latch onto the nearest surface with each shot, which then target Cryptids. These turrets last for quite a long time, and behave almost identically to a Seeder's turrets. However, only four turrets can be spawned by a single player at a time, the turrets the player spawns cannot be placed on walls - only the floor - and the turrets will eventually de-spawn on their own. The turrets can be spawned in areas that are not accessible to the player, such as near the spawn areas on the upper deck that the player cannot normally reach.

In Awakening, the Venom-X can be again obtained from building it from schematics. The Lightning and Fire variants return, but the Seeder variant doesn't due to the lack of Seeders on the map.

Venom-X in Third person, being used in Mayday.

The Venom-X returns in Call of Duty: Infinite Warfare.

The Venom-X was added to multiplayer as part of the September 26th, 2017 update, along with the Katana and Nunchucks.

The gun acts similarly to a grenade launcher, but with timed explosive detonations. The Venom-X has two differing firing modes producing either a long range, high damage projectile that sticks to surfaces with a low fire rate, or shorter ranged rounds with lower damage and a higher fire rate.

When used accurately, the Venom-X can be a devastating weapon in objective modes as it can quickly fill an area with a large amount of explosives which if performed at the right moment, often results in multi-kills. This makes it an ideal tool for both offense and defense roles. Its long range firing mode can also prove useful for taking out enemies that have set up defenses inside buildings or other indirect sight lines.

The Venom-X appears in the Zombies map The Beast From Beyond. It can be obtained by completing a small easter egg or by obtaining it from the Magic Wheel if the player is playing in Director's Cut. It functions identically to its Call of Duty: Ghosts counterpart, but can now be upgraded through various means. The explosion deals a very high amount of damage as well as the poison mist. When upgraded to the Venom-Y, the mist also slows zombies inside before killing them. The same applies for the Venom-Z, but with a stronger slow and more damage.

1. In order to acquire the Venom-X manually without Director's Cut, the player must first lure a Phantom Cryptid to the water trap area and activate the trap, allowing the Phantom to be damaged. Afterwards, an electric cabinet will be open in the Ops Center, which contains several buttons inside with randomized colors and number of buttons. The player has to figure out the correct button to interact with, which will close the cabinet and allow usage of the Containment Chamber.

The method to figure out the correct button is as follows:

2. Lure a zombie near the Containment Chamber, then use the computer terminal nearby to activate it, which will trap the zombie for 5 minutes. Go up to the room above Bombstopper, which contains 3 smaller terminals. Activate the middle terminal to bypass SuperUser Access. The two terminals on the left and right will now display a red square and a blue square, which are contained within a hidden maze. The player has to navigate the red square to the blue square without hitting the walls, using the D-pad (if on PC, use the keybinds for the following Action: Next/Previous Card (Up/Down), Use Souvenir (Left) and Use Kung-Fu Ability (Right)). Failure will result in the trapped zombie being killed, and a Phantom spawning in.

After completion of all mazes, a door in the Ops Center will open, revealing the Venom-X inside, which can be picked up for free. If lost afterwards, the Venom-X can be found in the Magic Wheel.

Follow along to the beeps and listen for the first 2 letters that follow which will be one of the following:

Follow along to the beeps and listen for the first 2 letters that follow which will be one of the following:

1. Activate the terminal near Bang Bangs once more, and input a new Morse Code in the computer room, similar to the step for Venom-Y upgrade. Use the same reference tab above for the codes.

2. After inputting the code, use the Venom-Y to get a number of special enemy kills (this includes Cryptids and special guest zombies). The number corresponds to the number input in the previous step.

3. Go to the terminal near the Pack-a-Punch portal, and set the date to 1950. Hidden figures similar to ones that appear in the Skullhop easter egg in Attack of the Radioactive Thing will appear. Head over in front of the Pack-a-Punch portal and start shooting them. The player must shoot at least the amount that the Morse Code cipher tells the player to shoot within one round, otherwise it will result in a failure.

4. After completion of this step, the player can now Pack-a-Punch the Venom-Y to Venom-Z, provided the Alien Fuses have been installed in the Pack-a-Punch Machine.

The Venom-X in first person 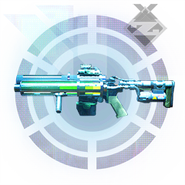 The Venom-X as seen in the Egg Slayer achievement icon 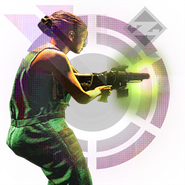