The Vepr is featured in Call of Duty Online.

The Vepr is encountered several times in the campaign, including the mission Clockwork.

The Vepr has a high rate of fire with much lower recoil than other SMGs. It sports the highest magazine capacity in its class at 42, which can be increased to a staggering 63 when using Extended Mags. Its long range damage is beaten out only by the MTAR-X and slightly by the Ripper, and tied with the Vector CRB, where it will take five shots to kill, whereas its close range damage is on the low side. This makes shooting through objects not as effective as other SMGs.

Due to its very large magazine and reserve ammo capacity, attachments such as Rapid Fire or Extended Mags are very good on the Vepr (note that these two cannot be used together, however). Rapid Fire will increase its already fast fire rate, decreasing its time to kill in close ranges, while its 42-round capacity will allow for longer periods of sustained fire than other submachine guns. Extended Mags will make the need to reload very minimal. and also spawn the player with a total of 189 starting ammo, which may lessen the need for Scavenger or Fully Loaded, depending on player preference.

The iron sights are very clear, making the need for many opticals next to obsolete. Barrel attachments are very popular among Vepr users, and the Barrel attachment selected will severely change the playstyle of this weapon. With Muzzle Brake, this weapon can be very competitive at medium ranges, where the Muzzle Brake will make it excel. The Silencer, on the other hand, can make the Vepr a very nice stealth weapon, but this can also make its viability at longer ranges dwindle. Finally, the muzzle flash can be rather obstructive on this weapon, which makes the Flash Suppressor an attachment to consider.

The Vepr is compared constantly to the MTAR-X, due to their similar rates of fire, longer ranges, and large magazine capacities. Performance wise, many players would opt for the MTAR-X due to it being one of the most competitive weapons at longer ranges and that it doesn't particularly chew up its magazine; however, the MTAR-X does not possess the same close range potential that the Vepr supplies players, due to larger magazines and a higher rate of fire, not to mention the lowered cost of using it over its competitor.

The Vepr was buffed on the April 3rd patch, along with most other SMGs, to make it a more competitive weapon. It received a 32% increase in its minimum damage range, meaning its damage will not drop off as quickly as it did before, making it much more viable at longer ranges.

As well, the Vepr was buffed in the fact that the sprint out times were decreased significantly, making it ready to shoot after sprinting in 0.12 seconds, faster than any other weapon in the game besides the Minigun. When combined with Ready Up, the Sprint Out time is near instant being 0.072 seconds. This allows players to gain a huge advantage in close quarters over other SMGs such as the Bizon or CBJ-MS.

The Vepr appears in Extinction on Point of Contact and Nightfall, costing $1500 in both maps.

Unfortunately, the Vepr only has a 32 round magazine, effectively killing the niche of using it over other SMGs, such as the Bizon, CBJ-MS, or MTAR-X, as they have a larger magazine size than the Vepr in Extinction, with the CBJ-MS being equal in capacity to the Vepr. Thankfully, the Vepr still provides great handling characteristics and a good reload speed, making the Vepr quite favorable for those that aren't running Weapon Specialist and/or Team Booster since the Vepr will still handle admirably in the hands of a soldier lacking both of these things.

The Vepr appears in Safeguard, and is obtained from Support Drops. It comes with a Grip.

Compared to the other SMG in this game mode, the MTAR-X, it outclasses it due to its higher magazine capacity and its other statistics being generally the same as the MTAR-X's.

The Vepr in first person 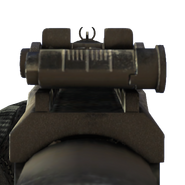 Model of the Vepr

The Vepr with a silencer and foregrip