"This was the Eastern Front, the blood of millions of my people soaked deep into this soil. Men and women who paid the ultimate price for what had to be done."
— Vikhor "Stitch" Kuzmin

Following the Destruction of Verdansk event, the modern-day version of the map in Warzone was replaced by a 1980s version called Verdansk '84 with the Season Three of Black Ops Cold War. With the release of Call of Duty: Vanguard Season One, Verdansk was entirely replaced by Caldera.

During World War II, Verdansk was occupied by German forces. They built an underground system of bunkers beneath the city, stockpiling weapons and ammunitions. As the war went on, the bunkers were abandoned by the Germans and barricaded off.

At some point during the Cold War, Imran Zakhaev prevented Perseus from obtaining weapons or Nova gas in Verdansk by sealing its main facility, fearing that Perseus would turn the world against the Soviet Union.

"Stitch, the rats are here. Adler is secure and headed to you in Verdansk."
— Kapano "Naga" Vang

In early 1984, CIA operative Russell Adler was captured by Perseus operative Vikhor "Stitch" Kuzmin. After being tortured in Laos for several months, Adler was sent to Verdansk where Stitch was operating.

On June 3rd, 1984, Stitch sent two operatives, Freya Helvig and Roman Gray, infiltrating a KGB black site at Mount Yamantau. The duo stole records of the "Dragovich Program", the Numbers program developed by Nikita Dragovich for brainwashed sleeper agents during the 1960s and notably used on CIA agent, Alex Mason. To cover their escape, the duo remotelly detonated a Greenlight nuclear device stored in the facility. Stitch observed the explosion from the Verdansk hospital where Adler was held prisoner.

Stitch worked on improving the Numbers brainwashing program, experimenting on Adler, to affect not only single individuals but entire nations in order to achieve Perseus' goal: the creation of a Greater Russia. However, one week after the destruction of Yamantau, a rescue team led by Frank Woods stormed the hospital and retrieved Adler.

Unbeknowst to Stitch, Adler's deep obession with Perseus interfered with the brainwash. Now in an altered state, Adler subconsciously fought against Stitch's programming. In the days following his return to duty, on June 26th, Adler was sent to Algeria to retrieve an American satellite deorbited by Perseus operative Owethu Mabuza as part of Stitch's plan. After eliminating Perseus forces, Adler recovered the satellite data recorder but reported it was destroyed during the re-entry.

In July, Adler discovered the abandoned German bunkers and began secretly drilling into them. Knowing the only way to stop Stitch was to destroy Verdansk, Adler placed seismic charges on the stockpiled munitions. At some point, Jason Hudson and Woods discussed Adler's actions and noted he was off grid while working in Verdansk. They soon believed he was compromised and Hudson sent Woods to capture him. On July 30th, Adler was interrogated at the NSA by Hudson and Mason to no avail, Adler claiming he had to destroy Stitch's operation in Verdansk. Three days later, Mason broke Stitch's programing, restoring Adler's mind. At the same time, Stitch discovered the rigged explosives in the German bunkers and sent several search teams while accompanying Benito "Fuze" Ortega to one of the bunkers. While Fuze was able to defuse one of the explosive, the other charges detonated, including one at the city stadium, creating massive crevasses and leveling the entire downtown.

After the Cold War, Russia and the Western nations worked together to rebuild Verdansk.

On October 24th, 2019, CIA Officer "Alex" and several US Marines were deployed near Verdansk to confirm the presence of chlorine gas inside a depot belong to Russian General Roman Barkov. The team launched an attack on the depot and was able to confirm the presence of the gas which was ready to be shipped to Urzikstan. After engaging with Barkov's forces, the team began leaving the area with a truck loaded with the gas. However, they were soon ambushed by a group of insurgents, secretly led by Hadir Karim, who left the team for dead and stole the gas.

"Price, there's something wrong in Verdansk. They are targeting their own. We need to find out why. Send fighters I can trust."
— Simon Riley in the Modern Warfare Season Two intro

On March 3rd, 2020, the terrorist organization Al-Qatala-Aljahdid, under the new leadership of Khaled Al-Asad, and supplied by Victor Zakhaev, a Russian Ultranationalist, invaded Kastovia and launched a full-scale assault on its capital, Verdansk. Supplied with military vehicles and equipments, Al-Qatala overwhelmed the military forces in Verdansk and occupied the city and its surroundings. As the inhabitants tried to flee the city, many were caught by the terrorists and were either executed or taken hostages. As the invasion progressed, Al-Qatala began shipping and stockpiling chemical weapons, derived from Barkov's chlorine gas. A temporary military alliance was formed between Russia and the West, Armistice, to organize an evacuation of the city and stop Al-Qatala from pushing through to Urzikstan.

In the days following the invasion, several operations were mounted to eliminate high-value targets of Al-Qatala's network in the Kastovian capital. The operations, carried out by the Arm-4 team, were intented to cripple the organization's access to weapons, funds, intelligence, and hardware in order to stop it.

The operations were successful in dismantling Al-Qatala's network and influence over Verdansk. In order to get rid of Armistice, Zakhaev and Al-Asad released the chemical weapons upon the city. In the chaos, Armistice operatives began turning on each other and proceeded fight among themselves to survive. Among the operatives was Lieutenant Simon "Ghost" Riley, member of Task Force 141, who started to investigate of the situation, requesting Task Force 141 leader, Captain John Price, to send him fighters he could trust to assist him.

Soon after, Zakhaev allowed Al-Asad and Al-Qatala to return to Urzikstan while his own men stayed in Verdansk. The conflict continued, however, as Price and Kyle "Gaz" Garrick, another member of Task Force 141, joined the fight. Many operators from Allegiance and Coalition also arrived in Verdansk.

"They came to Verdansk to stop us, but they couldn't resist fighting each other. This war is 50 years in the making. No more treaties, no more diplomacy... These weapons will no longer lie dormant. Your work is not in vain, father."
— Victor Zakhaev

Victor Zakhaev had long wished to fulfill his father's dream of bringing back the Soviet Union and getting rid of the Western influence over Russia. As a way to defeat Armistice, Zakhaev bribed one of their operatives, Arm 3-1, to attack other operatives. As distrust between Allegiance and Coalition grew, Zakhaev was able to travel throughout the city undetected. Arm 3-1 was sent to the Zordaya Prison by Zakhaev but managed to escape and, guilt-ridden, sent information related to Zakhaev to what was left of Armistice.

In the following months, little progress was made to stop Zakhaev, which led the Allegiance to enlist a private military company called Shadow Company. In August 2020, a small team of Shadow Company operatives led by Marcus Ortega arrived in Verdansk with intel from the Allegiance about comms traffic coming from the Verdansk National Arena. The team stormed the stadium, blowing off its roof and landed in its soccer field ready to eliminate any hostiles and hunt down Zakhaev. This proved to be fruitless as Zakhaev was nowhere to be found.

With the help of Ghost, Price discovered that Zakhaev had been evading detection by using the underground metro system to travel on foot. He tasked Chimera leader "Nikolai" alongside Farah Karim to enter the tunnels and power back the subway for use against Zakhaev. Afterwards, Price contacted Sergeant Marcus Griggs of the Demon Dogs to stand by for orders. Soon after, radiation was detected in the metro indicating that Zakhaev was moving radioactive material and dirty bombs through Verdansk.

In December 2020, Price and the Task Force 141, Ghost and Gaz, finally pinpointed Zakhaev location, in a bunker located near the coastline under one of the city spomeniks. Inside the bunker, Zakhaev was arming an ICBM aimed at Washington, D.C.. The Demon Dogs with the help of "Alex" and Farah launched a diversion while Price infiltrated the bunker. Price killed Zakhaev by throwing him off to the bottom of the missile silo. With Zakhaev dead, Price received the abort code, 6157, from "Nikolai" and prevented the missile from launching. The team then regrouped at the top of the Gora dam. There, Price received a call from Johnny "Soap" MacTavish informing him that things were heating up half a click off the coast of Verdansk. Price replied they were moving his way before they all jumped off the dam.

"Commander, I regret to inform you that Verdansk has fallen. Containment Protocol has been initiated."
— Russian Officer

On February 25th, 2021, the Vodianoy, a ship that disappeared for almost four decades, re-emerged near Verdansk and crashed into the coastline. The ship contained chemical compounds, as well as an infestation of Zombies. Originally contained to the shipwreck, the zombies began spreading to other parts of the city between March 11th and April 15th. Eventually, the entirety of Verdansk became contaminated, and the Armistice Command Central ordered operators to begin an evacuation of the city. On April 21st, the evacuation of Verdansk began but 45 minutes into the evacuation, the ACC deemed it a lost cause and Russia launched a nuclear strike, destroying Verdansk.[Canonical?]

Verdansk is surrounded by mountains with Arklov Peak located in the north-west part of the region. Two rivers run through the city, the Gora River in the west and the Karst River in the east. Both rivers flow into the Kastovian Sea in the south. 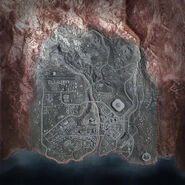 Verdansk at launch during Season Two of Modern Warfare 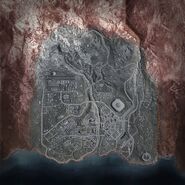 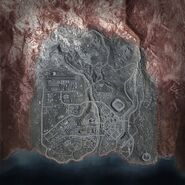 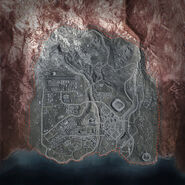 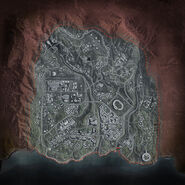 Verdansk '84 at the start of Season Three of Black Ops Cold War. 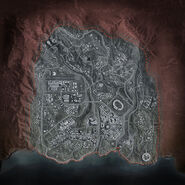 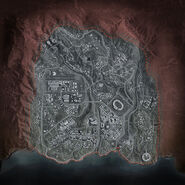 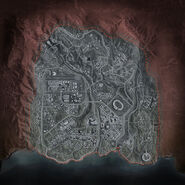 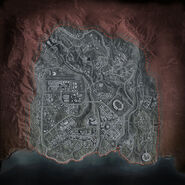 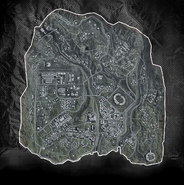 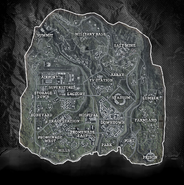 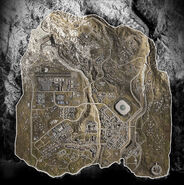 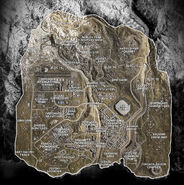 Verdansk in the intro cutscene of Fog of War.

Civilian being taken hostage by Al-Qatala near the Gora River.

A map of modern-day Verdansk found within Warzone.

A map of Verdansk in the 1980's as seen in the Outro cinematic for Season Two of Call of Duty: Black Ops Cold War.

Verdansk, shortly before being destroyed.

Posters for locations within Verdansk '84.