For other uses, see Vertigo.

"Use laser-guided missiles to take out enemy transport choppers at the Oasis Hotel."
— Level Description

"The luxurious “Oasis” hotel in Dubai hosts the latest Special Ops mission, in which players must use laser-guided RPG’s to dispatch waves of helicopters. Utilize rooftop advantage to defend from waves of enemies, before parachuting to a ground-level exfil point."
— Offical Description on the Call of Duty ELITE Content Calender

Vertigo is a Special Ops Mission Mode challenge in Call of Duty: Modern Warfare 3. It is part of Content Pack 7 for ELITE subscribers on Xbox 360.

Baseplate notifies the player that 16 enemy transport helicopters are approaching, the player will have to shoot them down with the Starstreak, after all of them are taken down, Baseplate will notify the player that a friendly helicopter with a Care Package drop containing a parachute is arriving, and that they must defend the rooftop, eventually, another transport helicopter will approach; a while after it is shot down, a Little Bird will drop off a Juggernaut unless the chopper is shot down beforehand.

After the Juggernaut is killed, the player will have to defend the rooftop for a little bit longer, then get the parachute of the Care Package drop point and parachute off the rooftop, then fight their way to the exfil point, fighting Inner Circle insurgents, Suicide Bombers, and Little Birds armed with miniguns and rockets.

) - Complete the "Vertigo" Special Ops mission on any difficulty.

) - Destroy all the Helicopters in the Vertigo Special Ops mission.

To Jugger or to Jugger-Naut (25

) - Kill all Juggernauts after they land on Veteran difficulty in the Special Ops mission Vertigo.

Concept art for the level on COD Elite.

Rooftop of Hotel Oasis where majority of the mission takes place.

The Starstreak missile in this mission is laser-guided by the player.

Aiming down the sights of the Starstreak.

The players' main objective is to take down several helicopters using the Starstreak.

For the first time, players interact with Care Packages in Special Ops.

For the first time in MW3, players parachute off a high edge in-game. 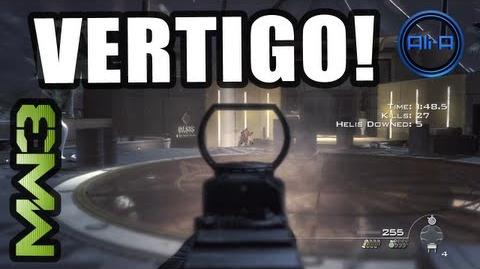