Vice President of the United States

Vice President of the United States

Overlord: "Metal 0-1, this is Overlord actual. You are being re-routed for Hamburg. We've got a principal level hostage rescue."
Sandman: "Who is it?"
Overlord: "The Vice President."
— Overlord and Sandman in "Goalpost".

The U.S. Vice President (codename "Goalpost") is a minor character in Call of Duty: Modern Warfare 3. The Vice President forms the basis of the mission entitled "Goalpost", in which he is the focus of the rescue operation by Team Metal. He was in Hamburg en route to a peace talk with his delegation when he was ambushed and captured, but is later rescued and extracted safely by Team Metal.

The Vice President with Sandman at the end of Goalpost. 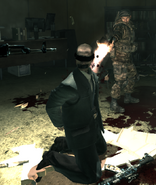 The Vice President (left) with President Vorshevsky (right) as seen in the introduction cutscene of "Turbulence."
Add a photo to this gallery

Retrieved from "https://callofduty.fandom.com/wiki/Vice_President_of_the_United_States?oldid=2393887"
Community content is available under CC-BY-SA unless otherwise noted.