"Search for evidence of Soviet presence within the villages of Northern Vietnam."
— Briefing

"Dragovich's lapdog Kravchenko was there. He knew we were coming."
— Mason

"Victor Charlie" is the ninth campaign mission in Call of Duty: Black Ops.

The mission involves investigating for signs of Russian presence, who are believed to be providing support for their North Vietnamese allies.

Mason and SOG team to find evidence and eliminate Kravchenko.

In this mission the player will start off in a downed helicopter. An injured pilot calls for help, but is shot soon after by two Vietcong assaulting the chopper, but Mason manages to kill them with his M1911; however the chopper starts sinking and Mason attempts to open the escape latch, only to have Reznov, who is on the outside of the chopper, do it for him. The moment Reznov appears, Mason again experiences auditory hallucinations of the numbers station.

Mason then swims up to a Viet Cong sampan, climbs up and takes a Viet Cong troop hostage and uses him as a human-shield to kill the rest of the hostiles with the Viet Cong AK-47. After proceeding along the river engaging more Viet Cong soldiers, Mason will be armed with only a unique SOG knife and his M1911, as he and Woods have to go on a small stealth mission. During the stealth mission, Mason continues to experience auditory hallucinations, including Reznov repeating to him his words years ago: "Dragovich. Kravchenko. Steiner."

First, they silently approach two Viet Cong in the water, pull them off their sampan, and slit their throats. Shortly after that, Mason and Woods will meet up with Bowman and another SOG operative. Now the two teams split up. Mason plants C4 on an underneath structure. They enter a small hut, and silently kill two sleeping enemies. And then Mason stabs a VC troop in the chest piercing his heart. Finally, Mason dives down a small cracked wood hole and plants another C4.

Now the player regroups with Woods, Bowman and several other SOG operatives, and after blowing the hut's village with the C4 previously planted and fight many Viet Cong targets entering in the village itself. The player is now armed with a Commando with Grenade Launcher, as well as a WA2000. The team encounter a ZPU-4, and Mason uses the Grim Reaper to dispose of it.

Next they encounter some rat holes, so Mason throws a grenade in each. Then they fight a turret, so if Mason still has the Grim Reaper, he can destroy it; doing this will grant an achievement. If not, he will just have to kill the operator, or to throw a grenade on the nest.

Now he and Swift are ordered to climb down a rat's nest and clear out any remaining Viet Cong, Woods gives Mason a flashlight, and he uses it with his Python. Mason orders Swift to hold, as he meets Reznov yet again, telling him Kravchenko is near. After Mason speaks to Reznov, who leaves on his own through another tunnel, Swift, disturbed, takes point and stares at Mason, yelling, "What the fuck's wrong with you?!" As Swift exhorts Mason to stay sane, however, Swift is ambushed by a Viet Cong hostile with a knife. Mason kills the hostile and moves on, and he takes out more hostiles ambushed in the rat's nest, until finally meeting up with Reznov again.

Reznov takes point, and counter attacks a Viet Cong ambusher. He then orders Mason to take point. As he kills more Viet Cong, they finally get to a lab or small radio station of some sort, a tape plays, and Kravchenko describes the Nova 6 gas, its effects and the times it takes to kill the victim. The rat's nest is rigged to blow, Mason and Reznov crawl their way to an exit which begins to collapse, Mason must then dig his way through some rocks. After reaching the gallery exit, there is no sign of Woods or Bowman. Mason stands above a high cliff, and Reznov begins to engage enemy forces on the other side of the cliff with only his M1911. Suddenly, Woods and Bowman come to the rescue in a 1st Cavalry Division helicopter, while engaging the VC on the other side of the cliff, covering Reznov. Mason then jumps into the helicopter and the squad is then sent to Laos.

Concept art of the river.

Inside the downed chopper.

Underwater in the sinking helicopter.

Dead VC in the water.

Viet Cong attacking the occupants of the chopper.

Tunnels the player has to go through.

Swift in the tunnels.

Woods attacking with Bowman behind him.

Slow-motion bullet-following effect activated at one point during the mission.

Moving down the creek.

Swimming through the river.

Woods and Bowman arriving on a UH-1 to extract Mason.

A ZPU that must be destroyed in order to bring in the air support. 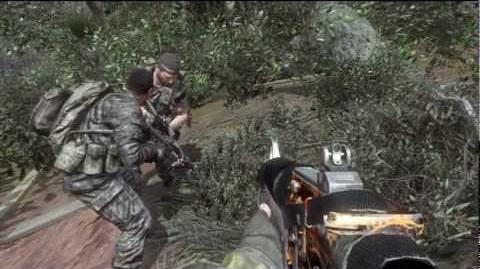