Call of Duty Wiki
Register
Don't have an account?
Sign In
Advertisement
in: Call of Duty: Modern Warfare Characters, Antagonists

"This is the arms dealer they call, "Mr. Z". Z is wanted by the International Criminal Court for "conspiracy to transport, sell, and supply arms to a foreign terrorist organization"."
— Sergeant Kamarov

Born in the 1970s, Victor Zakhaev was the middle son of Imran Zakhaev, a high-ranking official in the Interior Ministry of the Soviet Union. Victor's childhood coincided with a series of monumental political changes to his country. The introduction of new economic and cultural freedoms crippled the USSR as a major world power, much to Imran's dismay. As a child, Victor had a rare access to the to the tunnels and bunker systems of the Eastern Bloc, thanks to his father.

Loving, but also fearing his father, Victor had to learn to speak Italian, German, English and French. At the age of 16, he was enrolled into a prestigious preparatory school in Verdansk but was expelled soon after following an altercation with a teacher for grabbing the teacher's cane and breaking it to evade his corporal punishment. As punishment, Victor was sent to the Suvo Military School, where his peers were the more austere families of Soviet military personnel.

Victor graduated with the qualification of paratrooper, serving in the last unit of the Soviet Airborne Troops. In 1990, he was deployed to Tajikistan as part of a peacekeeping force to ebb the ethnic clashes that would lead to a string of civil wars activated by the Soviet Union's collapse.

Deputized by his father, Victor Zakhaev emerged as a leading advocate for the reclamation of mother Russia following the spreading of privatizations and ownership of former state enterprises. Living somewhere beneath the wing and under the shadow of his power-wielding father, Victor assumed some of his father's duties after he received a heart surgery in 1994. Victor joined the most secret division of the Federal Security Service, fighting terrorism and organized crime in Chechnya and beyond.

After the death of Imran Zakhaev in 2011, Victor's growing disenchantment with Modern Russia led him to sneaking out of the country along with his wife Yuila. It was then that he saw the potential in trafficking weapons to former Soviet nations that had descended into ongoing chaos in the wake of the power vacuums brought about by their budding independence.

Victor Zakhaev reportedly used what was left of his father's loyalist contacts and created Zakhaev Arms to smuggle weapons from Eastern Europe to Africa and the Middle East. Using his gun-running, Victor continued to wield influence with an eye toward fulfilling his father's unrealized dreams of returning the Soviet Union to its former glory through leveraging the threat of nuclear war.

In November 2019, following the death of General Roman Barkov, Captain John Price held a meeting with Kate Laswell where she informed him about Zakhaev's intention to take Barkov's place. Price assumed that Laswell was talking about his father Imran, whom he almost killed during a mission in Pripyat with MacMillan, another SAS operative. Laswell, however, clarified that it was indeed Victor. She went on to discuss how Zakhaev approved of Hadir Karim's actions and would help him escape from Russian custody.

Following the death of Al-Qatala's leader, Omar "The Wolf" Sulaman, Victor Zakhaev freed Khaled Al-Asad from his prison. Al-Asad seized command authority over the extremist group and founded Al-Qatala-Aljahdid. Zakhaev then forged an alliance with Al-Asad and became an adviser and arms supplier for the new Al-Qatala leader. On March 3rd, 2020, using Zakhaev's armaments, Al-Asad launched a full-scale assault against the city of Verdansk resulting in countless deaths and ultimately the mass evacuation of the city's civilian occupants.

While Armistice fought to repel the Al-Qatala threat in Verdansk, Zakhaev facilitated the movement of several nuclear weapons to bunkers around Verdansk. While Armistice was able to remove a nuclear core from Al-Qatala's possession, ultimately they did not succeed in crippling Al-Qatala. Zakhaev retaliated by strategizing with Al-Asad, causing conflicts between Armistice operators.

During a particular operation by Armistice, Al-Qatala released a massive amount of poisonous gas into Verdansk, trapping Armistice operators and causing extreme tension as they fought over extraction from Verdansk. The events that unfolded led to the dissolution of Armistice. At some point, Al-Asad was allowed to return to Urzikstan while Zakhaev continued operations in Verdansk.

Task Force 141 operator Lt. Simon "Ghost" Riley assisted remaining operators in tracking down Zakhaev in Verdansk, but for a time this provided no leads. However, Al-Qatala comms traffic was discovered by the Allegiance from within the Acropolis National Arena. This intel was given to Shadow Company, who used explosives to violently breach the stadium's roof and search for Zakhaev.

Shadow Company's efforts were fruitless, but Ghost continued to supply intelligence on tracking down Zakhaev. Eventually, a subway system was discovered by Price, which Zakhaev and Al-Qatala had been using to travel undetected. Farah Karim, leader of the Urzikstan Liberation Force, and "Nikolai," leader of Chimera, investigated but found that Zakhaev had not been using the trains, but instead traveled on foot through the tunnels. "Nikolai" powered the subways, and joined in fighting against Zakhaev.

Zakhaev used the tensions between the Coalition and the Allegiance to power up all the bunkers in Verdansk without realizing it, allowing him to activate the ICBM silo hidden within Bunker 10. His plan to fulfill his father's wishes ultimately failed however as Task Force 141 managed to get the abort code for the missile, 6157, and launched an assault with the help of Farah, "Alex" and Marcus Griggs' Demon Dogs in order to create a diversion. Price infiltrated Bunker 10 when Zakhaev activated the missile. Price shot him in the shoulder before throwing him off to the bottom of the silo. With Zakhaev dead, Price received the abort code from "Nikolai" and prevented the ICBM from launching. 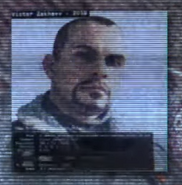 Portrait of Victor Zakhaev in a call with Khaled Al-Asad. [1] 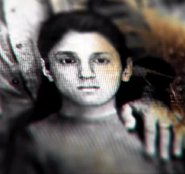 Victor as a child.

Zakhaev prepares to launch the nuke.

Zakhaev is confronted by Price.