For other characters, see Victor.
For other uses of Zakhaev, see Zakhaev.

"Zakhaev's son. Commander of the Ultranationalist forces in the field. Rotten apple doesn't fall far from the tree."
— Captain Price

Victor Zakhaev (Russian: Виктор Захаев) was the son of Imran Zakhaev and field commander of the Russian Ultranationalists. His relationship with his father is apparently very close and it can be assumed they share the same ideals, mainly of Russia returning to a Soviet-style government. He is easily recognizable by his blue-striped tracksuit. Zakhaev is also one of the Four Horsemen.

To distract the attention of the two armies to win over the Loyalists, Victor and his father made a deal with Khaled Al-Asad to start a coup in his country to distract the United States. It began with the nationally broadcasted execution of President Yasir Al-Fulani. Victor was in the unnamed Middle-Eastern country during the execution of Al-Fulani, riding along with him in the car that delivers him to the presidential palace and his eventual death, directing the driver and holding a Mini-Uzi.

"And the little punk'll know how to find Zakhaev?"
— Griggs

After the death of Al-Asad at the hands of Cpt. Price, Imran Zakhaev goes into hiding. Despite this, his son continues to directly lead the Ultranationalist forces in Russia. The S.A.S. and U.S.M.C. form a joint operation and then join with the Loyalists to stop both Zakhaevs. When Victor is driving to a check point he is ambushed by the Loyalist/SAS/USMC task force during the level "The Sins of the Father". He hits the tower with Griggs and Soap, but survives, and the pair chase him through the outskirts of an abandoned city. He was cornered in a five-story building by the combined forces, and trapped on the rooftop.

"You are all going to die anyways!"
— Victor's last words.

When SAS operative "Soap" MacTavish moved to take his weapon, Zakhaev committed suicide, shooting himself in the head with a M1911 pistol.

His official cause of death, as reported by the Pentagon, was "a car accident outside Volgograd".[1]

Victor's death deeply affected Imran, who takes over an ICBM Missile Silo in the Altay Mountains and launches two ICBMs at the United States' East Coast in retaliation. He also laments in an ultimatum to British and U.S. forces that "Our blood has been spilled on our soil. My blood... on their hands... they are the invaders...", in a trembling, angry voice.

Victor Zakhaev's corpse. Note the M9 in the holster.
Jeep Sins of the Father.jpg
Victor driving a Jeep.

A Military capture of Victor Zakhaev. 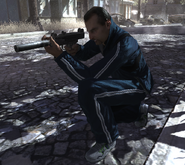 Retrieved from "https://callofduty.fandom.com/wiki/Victor_Zakhaev_(Original)?oldid=1517869"
Community content is available under CC-BY-SA unless otherwise noted.