Nothing is more precious than independence or freedom

"American Soldiers! Your aggression towards the People's Republic of Vietnam will not go unpunished. Instead of returning to your own country - you will die in ours."
— North Vietnamese Loudspeaker

In Call of Duty: Black Ops, there are several levels where North Vietnamese soldiers are fighting the player: "S.O.G.", "The Defector", "Crash Site" and "Payback". They are; however, not the main enemies in the game. Their usual appearance consists of light tan uniforms, along with a green pith helmet or a field cap looking similar to the WWII-era Japanese military cap. All headgear worn by the NVA has the communist star on a badge in the center. In multiplayer, they can be seen wearing bandannas around their neck. Unlike the Viet Cong guerrillas, they have a standard uniform, as they are an actual regular army. At times, they appear to have a better strategy at flanking and attacking the player than the Viet Cong. They also show a great courage in charging out (in a near suicidal fashion) at the player and NPCs. Nonetheless, they are a formidable opponent since they typically attack in a great deal of numbers, making it difficult for the player to shoot them all.

For the most part, their armory is the same as the Soviet Armed Forces armory, but lacking the variety of the latter group. They also have lesser variety of their Viet Cong counterparts.

In Call of Duty: Black Ops, the North Vietnamese Army is a playable multiplayer faction, and appears in three maps:

"Spare no one"
— Once a Multiplayer Match begins

"Destroy all enemies!"
— Once a multiplayer match begins.

"Victory is within our grasp, do not give up!"
— When the NVA are winning.

"Fight harder, defeat will not be tolerated."
— When the NVA are losing.

"We have shown them defeat!"
— When the NVA are victorious.

"We have displayed our power!"
— When the NVA are victorious.

"This defeat must be avenged!"
— When the NVA are defeated.

"Defeat will not be tolerated."
— When the NVA are defeated.

"Our dominance will be remembered!"
— When the NVA win are victorious.

"We have handed victory to our enemies."
— When NVA are defeated. 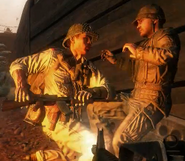 An NVA soldier attacking a Marine in Khe Sanh. Note how he holds his gun like a Banzai Charger.

NVA soldiers attacking US Military base in Khe Sanh.

An NVA soldier about to be ambushed 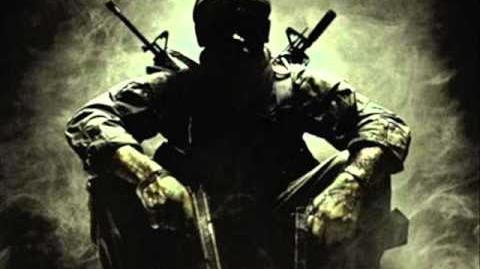