MAC-10, Streetsweeper, any weapon obtained by the player

"Ex-KGB Chemical Weapons expert who ran the Nova 6 program at Rebirth Island until a CIA raid ended it in 1968. Now driven by a burning hatred of Russell Adler, the CIA agent that took his eye during the Rebirth operation."
— In-game biography

Born on August 14th, 1938 in Moscow, Vikhor Kuzmin graduated from the Faculty of Technology of Organic Substances and Pharmaceutical Chemistry of the Mendeleev Institute of Chemical Technology in 1959. He joined the Operations and Technology Directorate of the KGB the same year and was assigned to the Laboratory 12 R&D facility.

Six years later, Kuzmin was assigned to manage production facilities on Rebirth Island and reported directly to Colonel Lev Kravchenko. In 1968, Kuzmin was captured and interrogated by the CIA after a raid on the Rebirth Island facility. Interrogated by Russell Adler, Kuzmin lost an eye but divulged only his name and rank. He was retrieved by Kravchenko, who stripped him of his rank for failing to repel the CIA operation and sent him to the Petropavlovsk Gulag.

Two years after arriving in the gulag, Kuzmin was contacted by Perseus, who found him a broken man questioning his loyalties to a state that had betrayed him. Driven by a hatred for both Adler and Kravchenko, Kuzmin was receptive to Perseus' vision of Greater Russia. His first-hand knowledge of Nova 6 was deemed invaluable in achieving Perseus' goals.

In 1976, a small team of operatives launched an attack on the prison leaving many guards and prisoners dead. In the aftermath, Kuzmin was reported missing. After breaking free from the gulag, Kuzmin continued to work with Perseus, making use of his Project Nova knowledge.

In 1983, the current Perseus in charge of the organization passed away to cancer, leaving Stitch to assume the mantle. Now in command and desiring revenge on Adler, Kuzmin led a small team of Perseus soldiers to raid a CIA safehouse in West Berlin, Germany. There, he left a flyer for Adler to later find, leading him to the Mall at the Pines in New Jersey. On January 21st, 1984, Adler conducted an operation at the mall, where he discovered Nova 6 being manufactured and stored. Just as this discovery is made, Kuzmin's soldiers reveal themselves from their hiding places, cornering Adler's team in a standoff. Kuzmin himself appeared from within an elevator and commanded his soldiers to kill everyone except for Adler, who he planned on handling personally. A gunfight emerged within the mall, and Adler is captured by Stitch and transported away by helicopter.

Three months later, on April 19th, a rescue team led by Frank Woods arrived in Laos in an attempt to find Adler. Kapano "Naga" Vang, another Perseus operative and leader of the region's Golden Triangle Cartel, informed Stitch that Adler was secure and headed to him in Verdansk. Stitch then ordered Naga to make the team believed they cared about their Nova 6 supply lines.

On June 2nd, Stitch ordered Perseus operatives Freya "Wraith" Helvig and Roman "Knight" Gray to infiltrate a base in Mount Yamantau and recover the numbers data gathered by Nikita Dragovich. After being contacted by Wraith, Stitch informs her that his work with Adler is almost complete, and that what Perseus does in Verdansk will pave way for a "Greater Russia" as the base on Yamantau is nuked. Eight days later on June 10th, Adler was rescued from Verdansk by Woods. While reviewing the rescue from a Soviet body cam sometime later, Stitch revealed to Gray and Helvig that his work on Alder was complete, though satellite interference was preventing them from moving forward with their larger scheme involving the Verdansk test subjects. Gray urged that they make a move while they had the advantage, with Wraith adding that their asset in South Africa was standing by. Agreeing to the two's proposals, Stitch dispatches them to "make the call".

On June 26th, Perseus asset Owethu "Jackal" Mabuza and his men assault the Jumpseat satellite ground station in South Africa, where they take one of the technicians hostage. Jackal calls Stitch, who instructed the technician to de-orbit the satellites that would disrupt Stitch's number broadcast. Once the deed was done, Stitch ordered Jackal to eliminate the technician. With the satellites out of the way, Stitch had Wraith make a dead drop in Verdansk for Perseus hacker Kaori "Kitsune" Tanaka to acquire.

On July 23, 1984, Kitsune and a team of Perseus agents infiltrated an Echelon NATO listening station on Teufelsberg in West Berlin. Fighting her way to the control room, she managed to hijacked the system and start the broadcast as a team led by Woods and Colton "Stryker" Greenfield arrived at the site. With the broadcast active, operatives of the team started to turn on each other, allowing Kitsune to escape. From Verdansk, Stitch congratulated Kitsune for the successful operation.

However, as a result of a mixture of his brainwashing and free will, Adler went rogue and attempted to destroy Stitch's operation in Verdansk by triggering a series of explosives beneath the city. On August 2nd, Stitch and demolition expert Benito "Fuze" Ortega attempted to deactivate the explosives, though while they were successful in terminating one of the rows of explosives, the rest detonated, crippling Verdansk. Angered, Stitch remarked that he had unfinished business with Adler.

On August 19th, five days after his 46th birthday, Stitch visited the previous Perseus' grave in the woods outside Verdansk, where he would be confronted by Adler, who managed to break his brainwashing through Alex Mason's help. Stitch mockingly greeted Adler by saying he took his time, to which Adler retorted that his plans were finished. Stitch attempted to trigger Adler's brainwashing, though Adler told him to that he was fixed. Stitch remained unfazed however, saying it was worth a try before explaining that his plans were finished long before Adler destroyed Verdansk. When questioned where Perseus was, Stitch revealed that Perseus was not a single person but an ideology before revealing the previous Perseus' fate to Adler, adding that he was a great man with a great vision.

Stitch explained that the deceased Perseus was not the first and that he himself would not be the last. Adler attempted to capture him, saying that there was blood on his hands, though Stitch mocked him for his choice of words. Stitch tells Adler that they are at what used to be the Eastern Front, where millions of his fellow countrymen and women spilled their blood to do what had to be done. Tired of his words, Alder resolved to killing Stitch, though the Soviet solemnly told Adler that his life no longer mattered, telling him to finish what he started on Rebirth Island before adding that he already changed the world in ways he could not imagine. With that, Adler executed Stitch with a shot to the back of the head.

Stitch appears in Call of Duty: Mobile and is set to be added during Season 6: To the Skies.

Stitch's promotional artwork used alongside advertising for Season One.

Stitch as seen on the Season One Battle Pass promo.

Stitch as an operator in Multiplayer. 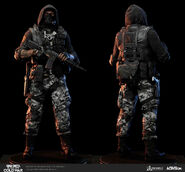 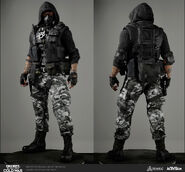 Adler stabs Stitch in the eye. 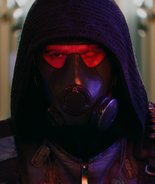 The facial scaring caused by the stab.

Stitch in the Season One outro.

Stitch in the Season Three intro.

Stitch with his prisoner, Adler.

Stitch observes the explosion at Yamantau.

Stitch talking to Owethu "Jackal" Mabuza and an unnamed Hardware Engineer about where to send the satellites.

Adler successfully triggers the bombs in Verdansk causing Stitch to go after him.

Stitch at the grave of the previous Perseus.

Stitch held at gunpoint by Adler.

Stitch recalls the sacrifices of the Soviet people during the Eastern Front.

Stitch tells Adler his life holds no meaning any more.

Stitch reveals that he had changed the world in ways unimaginable.

As Adler holds him at gunpoint, Stitch accepts his fate and allows his nemesis to kill him.