"My name is Viktor Reznov... And I will have my revenge!"
— Reznov in "Rebirth"

"My father was a musician in Stalingrad. During the German occupation, the sound of his violin filled the air with magnificent music - Korsakov, Stasov - many of the great nationalist composers. To my countrymen, it was a symbol of hope. To the Germans, it was a symbol of defiance. Even now, his music still haunts me. The Nazis slit his throat while he slept. Collaborating with any Nazi is a betrayal, a betrayal against all of Mother Russia. Dragovich and Kravchenko were not troubled by such matters. They looked only to advance towards their own interests and agendas..."
— Reznov explaining his father's death.

Reznov was born in Saint Petersburg, Russia (renamed Petrograd in 1914 and Leningrad ten years later) and joined the Red Army sometime before World War II. According to Reznov, his father was a musician who, during the Siege of Stalingrad, played music by patriotic composers with his violin. His music was a symbol of hope for his fellow countrymen and defiance for the Germans. His father had his throat slit by a German while he slept, one of the many reasons Reznov hated the Nazi German soldiers.

"The rotten cancer of the Fascist Reich ravages Europe like a plague. Their relentless drive into our motherland steals the lives of men, women, and children alike. The arrogance of their leaders is matched only by the brutality of their soldiers. These are the darkest days of the Nazi occupation of Stalingrad."
— Reznov explaining the Nazis' push into Stalingrad.

He is first seen in the level Vendetta as a sniper trying to assassinate the German general Heinrich Amsel, the "architect of Stalingrad's misery". As one of the only two survivors of a brutal German massacre near a fountain, he is saved from being executed by feigning death. It is here that he and Dimitri Petrenko first meet each other, with Reznov explaining his situation to Dimitri. Reznov, who can no longer snipe precisely as a marksman due to his injured hand, gives Petrenko his scoped Mosin Nagant rifle, and asks him to eliminate the general. Reznov guides Dimitri on killing a few German soldiers as German bombers fly overhead to shroud out the noise of the gunshots. He leads him through Stalingrad, dueling against a German sniper, and a whole German platoon with multiple soldiers equipped with Flammenwerfer 35s.

Then, they are saved by Petrenko's squad led by Daletski, and continue with them on an assault against a Nazi communication post. After fierce fighting, Petrenko kills Amsel, which gives Reznov a hearty chuckle. They are soon attacked by German Panzers and soldiers. Reznov holds off numerous German soldiers before he jumps in a canal, with Dimitri soon following him. It is important to note that due to Reznov's injured finger he could not fire his rifle with perfect aim, and thus, his "character class" was changed to Submachine Gunner as he wields a PPSh-41 from then on. He is seen without his finger three years later.

"Our grip tightens around the black heart of Berlin. The Führer demands all to shed their last drop of blood in it's defense. The old, the young, the weak. If they stand for Germany, they die for Germany. Building by building. Room by room. One rat at a time."
— Reznov to his troops, as they move farther into Berlin

Three years later, on April 18, 1945 in Seelow Heights, Germany, Soviet troops are pushing towards Berlin. Sergeant Reznov along with a new recruit Chernov comes to rescue the captured Dimitri Petrenko from three German soldiers. Reznov often tells the other soldiers to follow Dimitri as an example, especially to Chernov, who seems to be shocked by the vengeful violence of his comrades against Wehrmacht soldiers. The atrocities Reznov and Petrenko saw at Stalingrad made them feel no pity for German troops.

In the level Heart of the Reich, near the Reichstag, Reznov orders Chernov to at least prove he can die for his country, if he can't kill for it, giving him the Russian flag that must be planted on the top of the Reichstag, because Chernov was writing in his diary. Reznov also states that "no one will ever read this." After Chernov had been wounded by a flamethrower, he takes Chernov's diary and states that "someone should read this," contrary to what he had said earlier. Another soldier carries the flag to the top of the roof but is killed before being able to plant it. Reznov then asks Petrenko to take the flag and plant it. When Petrenko gets shot almost fatally with a P-38 by a surviving SS trooper, Reznov jumps in and slices the unfortunate German twice in the torso and impales him in the back. After that, he helps Petrenko up, and tells Petrenko that he can make it, and that he always survives. He then cuts the rope holding the Nazi flag and tells Petrenko to plant the Soviet flag. He expects the two of them to return to their home as "heroes". Reznov mentions many times that the heart of the army cannot be broken as long as Dimitri lives.

"The men and I had fought through the most bitter of winters on the Eastern Front, but we were no strangers to the cold. Even now, the blood in my veins chills when I think back to the events of that day... Far, far from home..."
— Reznov telling Mason the story of Project Nova

Six months after the the Battle of Berlin, Reznov was promoted to the rank of Captain. Reznov continued to serve in the 3rd Shock Army alongside Dimitri Petrenko under the orders of Kravtchenko and Dragovich, despite maintaining animosity with Dragovich for his failure to assist during Stalingrad. Reznov was deployed to Arctic Circle to capture the Nazi scientist Steiner, the mastermind behind Nova-6, a nerve toxin ordered in secret by Hitler to combat the imminent Allied victory. The Russians swept through the remaining SS troops and made contact with Steiner, who was expecting Dragovich. Reznov and Petrenko lead the way into the hold of the frozen vessel, discovering that the Germans were planning on using long-range V2 rockets to send Nova-6 to Allied cities. The group finds and secures Nova-6, but Dragovich orders his troops to restrain Reznov and his soldiers to see the effects of Nova-6 himself. Reznov witnesses Petrenko's horrific death when he and his comrades are gassed. Reznov escapes the same fate by the timely arrival of British commandos also seeking the secret Nazi nerve toxin. Reznov leads his small group of soldiers out of the vessel, killing both British and Russian soldiers in their escape. He manages to arm explosives to sink the ship under the ice.

Reznov was presumably captured and sent to a prison camp in Vorkuta, and had been there for the past 18 years. There, he became a companion to an American prisoner, Alex Mason, gaining his trust and protecting him during their time in the gulag. Because of this bond, Reznov was able to exploit Mason's resistance to Steiner and Dragovich's attempt to brainwash him by overriding their original mission with his own personal agenda: killing Dragovich, Kravchenko and Steiner.

Reznov masterminds a massive uprising in the gulag. He and Mason engaged in a mock fist fight to draw the guards' attention. Once Mason eliminated the guard and seized the keys, Reznov led the prisoners to the surface. The Russian prisoners expressed doubt over Mason's trustworthiness, but Reznov convinced them by explaining how they were both "soldiers without an army" and betrayed by their leaders. Reznov continued to lead the insurrection, securing a secret weapon for Mason to blow their way out. He pulled Mason out of a tear gas barrage and the two escaped on motorcycles. Mason managed to escape by leaping onto a train, but Reznov is surrounded by the pursuing soldiers, and is killed.

Years later during the Vietnam War, the SOG was dispatched to Hue City to meet up with a Russian defector carrying an important dossier on Nova-6. To Mason's surprise, the defector turned out to be Reznov. Reznov gave Mason the dossier and revealed that Dragovich and Kravchenko are nearby. Reznov fought alongside Mason, but went missing during the American incursion into Laos. He reappeared after Mason's helicopter crashes, stating that Woods was a good man and that Mason had chosen his friends well. He met up with Mason again inside the Viet Cong tunnels. At this point, Swift turned around and asked what was wrong with Mason, seemingly oblivious to his contact with Reznov. When playing these levels, it is clear that Reznov is part of Mason's imagination since his right index finger, (which he lost in Call of Duty: World at War) is still there.

After Kravchenko's death, Reznov accompanied Mason in his unauthorized assault on Rebirth Island. The two of them fought their way to Steiner, and Reznov proceeded to execute him with a pistol. Mason insisted that it was Reznov who killed Steiner. However, the real events were witnessed by Hudson and Weaver, who saw Mason executing Steiner with a pistol while proclaiming himself to be Viktor Reznov.

During Mason's interrogation, Hudson and Weaver revealed that the real Viktor Reznov had been dead for five years, having been killed in the escape from Vorkuta. Having brainwashed Mason, Reznov was able to complete his personal objective of killing Dragovich, Kravchenko and Steiner; leading Mason to become obsessed with pursuing them in spite his other objectives, inadvertently continuing Reznov's posthumous legacy. The Reznov witnessed by Mason was a guardian angel-like hallucination, possibly developed by multiple personality disorder.

After Mason finally killed Nikita Dragovich, he heard the voice of Reznov commending him for doing what Reznov himself could not do and for completing his legacy.

Mason as Reznov in Rebirth Island. 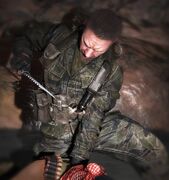 Dimitri and Reznov being forced to test Nova 6 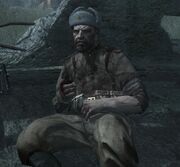 Reznov during the escape of Vorkuta

Viktor Reznov in the tunnels with Mason 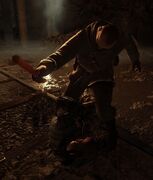 A Prison Guard beating up Reznov in "Vorkuta"

Reznov rallying the prisoners with a speech

Reznov using the blowtorch on the main armory's door

Reznov in the defector
Add a photo to this gallery

If the player decodes the phonetic alphabet code names (X-ray, Sierra etc.) into their first letters, and changing the serial numbers into letters (A-1, B-2) in the beginning of each level, and removing all the Xs, the player will get this message, "Reznov is dead, or is he dead, there was no body, is he who he says he is".