For a similarly named map in Call of Duty: Black Ops, see Villa.

"Back on the Grid"

Village is a multiplayer map that appears in Call of Duty: Modern Warfare 3. It was first revealed at Call of Duty: XP. It is set in an African village in a jungle and features the African Militia fighting the PMC.

Village is a large sized map in Call of Duty: Modern Warfare 3, taking place in an African village. The map has a creek running through the middle, with a bridge spanning over it, that is fed by a waterfall inside a cave at the corner of the map. The map has many long lines of sight, and many buildings that offer close quarters combat. On one side of the creek are the main village buildings of the map,and on the other side of the creek seems to be one building with a canopy not far away.

In Domination, Flag A is located near a well just outside the entrance to the waterfall cave. Flag B is located on the bridge that spans the creek and Flag C is located just behind the United Gospel Church, which is near to where the African Militia initially spawn.

In Survival Mode, Village is a Tier 1 map and has the difficulty of Easy. The player(s) start with the Five Seven, two Frag Grenades, two Flash Grenades, a Self Revive, and 250 Armor. The hostiles include Bomb Squads, Attack Dogs, Choppers, and Juggernauts. The Claymore Experts spawn in around wave 22.

The Weapon Armory is located in a shack, and the Equipment Armory is nearby. The tree trunk is a decent spot to defend as well as having the Air Support Armory right there. 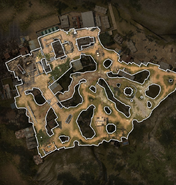 A PMC soldier near the falls on Village.

The Teddy Bear atop the church

Village Combat Card
Add a photo to this gallery

Retrieved from "https://callofduty.fandom.com/wiki/Village?oldid=1500124"
Community content is available under CC-BY-SA unless otherwise noted.