For the map in Call of Duty: Black Ops, see Firing Range.

The Virtual Firing Range is a Create-A-Class feature in Call of Duty: Advanced Warfare that allows the player to practice hitting targets on a firing range, similar to that of the firing range included in the mission "Atlas". There are eight "stations", or "lanes", the player can go to for more challenging experiences. There is also a stopwatch at the top showing the amount of seconds elapsed when in one of the lanes.

On the left on each station window, there is a computer that has multiple statistics, including: number of shots fired, accuracy, and number of bullets that hit targets. 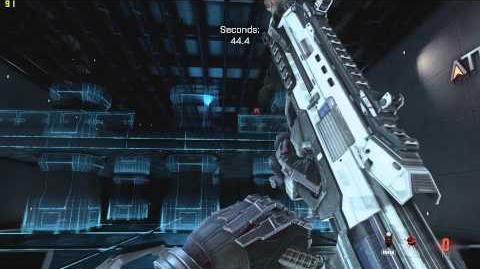 Retrieved from "https://callofduty.fandom.com/wiki/Virtual_Firing_Range?oldid=2336575"
Community content is available under CC-BY-SA unless otherwise noted.