Vivian Harris[1] is a character in Call of Duty: WWII.

Vivian is a female British Special Operations Executive agent. In the mission S.O.E., she and Arthur Crowley team up with the 1st Infantry Division and are assigned to take out a German Panzerzug carrying V-2 Rockets.

She is later seen in the mission Liberation, driving Arthur Crowley and Camille "Rousseau" Denis to the German garrison headquarters in German-occupied Paris, France. Later, she is seen fighting with 1st Infantry Division and French Resistance to liberate Paris from the Nazis. She is last seen celebrating the liberation of the city.

Vivian driving a car to the German HQ

Vivan looking at the fireworks after the Liberation of France 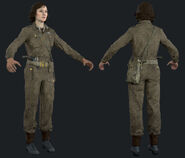 Retrieved from "https://callofduty.fandom.com/wiki/Vivian_Harris/WWII?oldid=2462012"
Community content is available under CC-BY-SA unless otherwise noted.