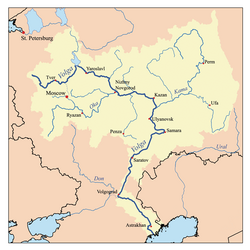 It is the site of a major battle during World War II.

In the original game, Call of Duty, the first Russian mission is to fight on the Volga River. This happens in September 1942, you are playing as Alexei Ivanovich Voronin, a Russian conscript. This level might have been based entirely off of the movie, Enemy at the Gates, which opening seen is the charge up the Volga. You are only given the Mosin Nagant Ammo "weapon" (a clip of Mosin Nagant ammunition), which is a reference to the real Battle.

In the game Call of Duty: Finest Hour for the Xbox and the PS2, the first level is the attack on the Volga River. You land at the docks, and, again, obtain the Mosin Nagant Ammo clip "weapon", like the original Call of Duty. You must follow Sergeant Oleg Puskov up the bank to assault the German defenders. The level eventually takes you to an oil refinery in Stalingrad. This is a brief picture of the hell of charging up the bluffs.

In the first Stalingrad level briefing in Call of Duty 2, in the diary of Vasili Ivanovich Koslov, it mentions the charging up the Volga River months before the present battle. It mentions that his unit took especially many casualties coming up, against a wall of German machine gun fire.

The Volga River can be seen in the distance in the zombies map Gorod Krovi, which is set in Stalingrad.

Retrieved from "https://callofduty.fandom.com/wiki/Volga?oldid=2332626"
Community content is available under CC-BY-SA unless otherwise noted.