For the rifle used by the militia, see Volkssturmgewehr.

"The Führer demands all to shed their last drop of blood in its defense. The old... The young... The weak. If they stand for Germany... They die for Germany."
— Reznov, referencing the concept of the Volkssturm

The Volkssturm was a German national militia formed in 1944, during the last months of World War II.

The Volkssturm was originally going to appear late into Call of Duty: World at War's Soviet campaign, but was ultimately scrapped. There are two cut models differing only in the shade of the tunics; one with a dark tunic and one with a much lighter tone. There are also cut head models that only differ slightly from the standard German models. The concept of the Volkssturm is briefly referenced in Eviction, where Reznov mentions that the "Führer" demands that all of Germany's men even "The old... The young... The weak" fight to the death against the Soviets. 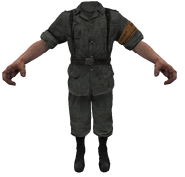 Close-up of the Volkssturm armband.
Add a photo to this gallery
Retrieved from "https://callofduty.fandom.com/wiki/Volkssturm?oldid=2447960"
Community content is available under CC-BY-SA unless otherwise noted.