On orders of the Office of the DD/CIA, my team has come to a conclusion regarding the future operational status of operative Alex Mason. The recommendations found herein were considered following due analysis of the full Mason file, which includes but is not limited to: psychological profile, service record to date, known KGB interrogation techniques, and the transcripts of operative Mason's debriefing following his recent escape from the Soviet labor camp. For your review, please find the following summary:

After cutting a bloody swath through Berlin at the end of WW2, Reznov believed he would return to his homeland as a hero. However, his fate was irrevocably changed following a post-war mission to the Arctic Circle (details of this mission are unclear). A rift between Reznov and his comrades resulted in incarceration within the Soviet Gulag system, where he endured years of harsh punishment and attempted "reprogramming." HUMINT indicates that this served only to create a more twisted, angry, and unpredictable Reznov: he manipulates those around him for his own agendas, agendas that he keeps very close to his vest. Despite his age, Reznov is an accomplished soldier and more than capable of delivering a brutal beating to anyone or anything standing in his way. This is particularly evident in regards to his occasional outbursts of extreme violence. 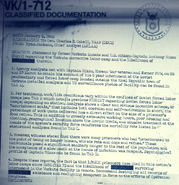 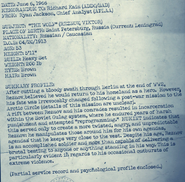 Complete document
Add a photo to this gallery

Intel No. 3
Add a photo to this gallery
Retrieved from "https://callofduty.fandom.com/wiki/Vorkuta/Intel?oldid=2428760"
Community content is available under CC-BY-SA unless otherwise noted.