Step 1: Secure the keys
Step 2: Ascend from darkness
Step 3: Rain fire
Step 4: Unleash the horde
Get A Shotgun
Step 5: Skewer the winged beast
Get To The Armory
Deactivate the security door
Step 6: Wield a fist of iron
Protect Reznov
Get the minigun
Step 7: Raise Hell
Step 8: Freedom
Jump On Train

For the prison where the level takes place, see Vorkuta (prison).

"He and us are not so different... We are all soldiers, without an army. Betrayed. Forgotten. Abandoned. In Vorkuta, we are ALL brothers!"
— Reznov

"Vorkuta" is the second campaign mission featured in Call of Duty: Black Ops. Taking place on October 6, 1963, the player controls the main protagonist Mason as he attempts to escape the Russian labor camp, Vorkuta with Reznov with assistance from the prisoners of the labor camp.

We suspect detention at Vorkuta labor camp in U.S.S.R.

But the exact whereabouts of Mason is unknown

Mason starts off in a fight with Viktor Reznov to draw out a guard. This is a cutscene, so the player does not need to do anything here. They succeed in doing so, and a guard armed with a baton comes up to the two. After Reznov calls him "svoloch" (bastard), the guard starts to beat him with the baton. Mason gets up, picks up a rock and kills the guard with a single blow from the rock. He then helps Reznov up, and Reznov scavenges the keys off the guard while also taking a knife, completing Step One of their escape - "Secure the keys"

Mason fights his way down the tunnel where he encounters a brute named Sergei. Fortunately, Sergei is on their side, which Mason comments "Glad you're a friend, Sergei." At the end of the tunnel, there is a lift which takes the band of prisoners out of the mine. In the lift, a prisoner questions whether Mason, an American, can be trusted or not. Reznov sticks up for him, stating he could trust him with his life.

Outside the lift, there are some unarmed prisoners surrounding a prison guard armed with a Makarov (with his back to the lift), who is shooting them as they try to take him down. Sergei exits the lift armed with a pickaxe, and brutally kills the guard. The player can now pick up a Makarov to help him fight off any resistance. The prisoners then push open a large metal door which opens up into a coal truck yard, to complete step two of the escape, which has a guard tower with a machine gun turret overlooking it which kills all the prisoners. This prompts Reznov, Mason and Sergei to run behind a coal truck and use it as moving cover as they push it along the track towards the tower. Mason must cover Reznov and Sergei as they push the cart by killing any resistance coming in on their sides.

The tower is then destroyed by an improvised incendiary device (possibly an ignited chunk of coal) launched from a slingshot, which is Step 3 of the escape. The band of soldiers can now enter the military compound of the gulag. Mason goes to the top of the building they enter and uses a giant Slingshot to destroy three targets. The slingshot works similarly to a grenade launcher and has the same aiming reticle. After destroying the three targets, Mason goes down and can now arm himself with a KS-23, and plenty of ammunition from an arms room which Sergei opened.

The prisoners exit the building and Mason shoots the lock to the gate. The prisoners go through this gate and engage the prison guards. The prison guards are armed with AK47s. After proceeding to the objective, Mason picks up a harpoon-firing KS-23, and fires the harpoon at the Mi-8 Hip Helicopter which had been keeping them pinned down with door machine gun. As the end of the rope was tied to a pipe, the helicopter cannot move and spins into some tanks and is destroyed. This completes step five of the escape, Skewer the winged beast.

The prisoners now enter a large building full of guards. The player can pick up an AK47 with Grenade Launcher to take out soldiers who are using moving cover. Once the prisoners reach a closing door, Sergei rushes in to hold the door up. However, he is shot from a floor above and killed, letting the door close, but not before Mason slides under the door and to the other side. Mason then opens the door, and the prisoners need to fight their way to a garage, where Reznov finds a blowtorch which he will use to open the armory door. Mason then needs to cover Reznov as he does this. An easy solution for this is to pick off all standard guards, then crouch in cover with the GP-25 grenade launcher equipped. As the brutes rush out from their new door, the player can easily pick them off, destroying them in one hit. Once the door is open, Mason picks up a Death Machine, which is Step 6, Wield a fist of iron.

The prisoners now must fight their way to a warehouse where they can make their escape. Using the Death Machine, Mason can easily destroy incoming trucks of soldiers (Step 7, Raise Hell) Once near the warehouse, the guards use tear gas on the prisoners. Knocking out Mason, he's dragged to safety by Reznov. Mason wakes up in the warehouse, where he and Reznov take some motorbikes in an attempt to complete step eight, Freedom. They then smash through a window, make a break for a train, while under fire from enemy soldiers. Mason has an auto-aiming, unlimited ammo Model 1887 which he can use to protect himself during the escape. Reznov and Mason then jump to a truck with a DShK machine gun on it, Mason uses the gun to kill as many enemies as he can. They then come alongside the train, and Mason jumps for a ladder on the side of it. He exclaims to Reznov to jump, but Reznov replies that only freedom for Mason was intended, driving the truck away to distract the pursuing soldiers. 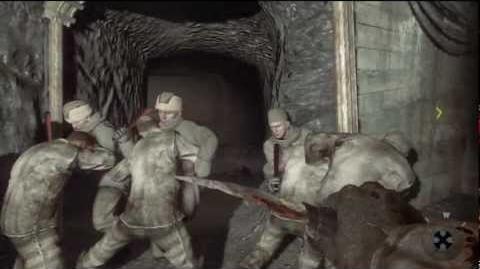 Concept art of the mine.

Concept art of the Russian HQ.

Concept art of the armory. 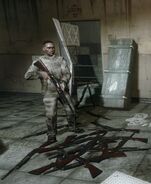 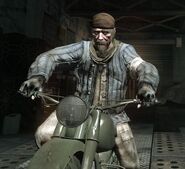 The guard before Mason hits him with a rock.

The Slingshot being used by the Vorkuta Prisoners. 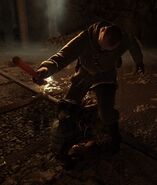 A Prison Guard beating up Reznov. 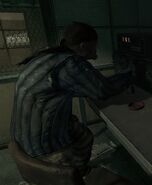 Reznov rallying the prisoners with a speech.

Reznov using the blowtorch on the main armory's door.

Reznov punching Mason in a fake fight.
Add a photo to this gallery

Retrieved from "https://callofduty.fandom.com/wiki/Vorkuta_(level)?oldid=2475267"
Community content is available under CC-BY-SA unless otherwise noted.