"I like to keep this for close encounters."
— Gaz in "Crew Expendable".

In multiplayer, the W1200 shotgun is the first shotgun available at level 2, when the Demolitions default class is unlocked. It can be modified with a Red Dot Sight and Foregrip. The W1200 is superior to most weapons in close quarters combat because of the high amount of damage per shell, which usually amounts to one-shot kills, including players using Juggernaut. Also, unlike the M1014, the player can walk at full speed when aiming down the sights. Despite the slow rate of fire due to the pump-action, the W1200 can still be used to engage multiple enemies at close range.

When the W1200 is combined with the Double Tap perk, the W1200's pumping speed is increased, resulting in a faster rate of fire and higher recoil.

The main disadvantage of the W1200 is its ineffectiveness in mid to long-range firefights. Unlike other weapons, shotguns (W1200 and M1014) will not inflict damage beyond a certain range. Thus, players using shotguns tend to stay in narrow or indoor areas. It also has fairly high recoil which takes a while to reset, making second shots with it fairly difficult. The grip attachment lowers the recoil at the cost of a Tier 1 perk.

The W1200 appears in Old School Mode with 14 shells loaded and 14 shells in reserve ammunition. 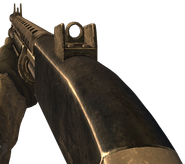 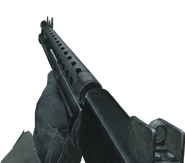 Vasquez's custom W1200; note the lack of a stock

The W1200 in firstperson

The W1200 as it appears in the Reveal trailer for Call of Duty: Modern Warfare Remastered

The W1200 was first confirmed to be in the game when it was seen in the original trailers for Call of Duty: Modern Warfare 2. Like the M1911, although it is featured in-game, it is only usable in the "Museum" level. However, unlike the M1911, it cannot be found in the display case with the other guns; it is only found on the body of the snow camouflaged NPC in the first room, second from the right, although sometimes he will carry an M1014 instead. It is never even seen in any other single player level, although it is seen in the cutscene intro for S.S.D.D. in the hands of an FSB operative.

The W1200 has an extremely long range for a shotgun, and remains lethal at ranges far beyond those usually expected for a shotgun. For example, it is capable of killing everyone in the No Russian exhibit from the Contingency exhibit in the Museum.

The pickup icon is the same as the one in Call of Duty 4, and in the Cliffhanger E3 2009 gameplay video, the W1200 pickup icon was used as placeholder for the SPAS-12's one.

In the Polish PC version of the game, the weapon does appear in single player. It is seen in the hands of the Militia in the two Brazil missions (instead of the SPAS-12) and in the armory in The Gulag. It should be noted that there is a unique W1200 in Takedown, specifically the part when Meat starts shooting in the air and attracts the locals. The militiamen with W1200s have SPAS-12-like stock and animations, using the W1200 as a base. The W1200 in The Hornet's Nest and the armory are from the original Modern Warfare.

Third-person model of the W1200 with a Red Dot Sight and a Grip, none of which are available to it in the game

Russian FSB operative holding a W1200 in the "S.S.D.D." cutscene

The BY15 has hipfire tight pellet spread and high pellet travel range, allowing it to one-hit kill enemies at very long range. However, such tight pellet spread requires players to be accurate in order to land all pellets on enemies and avoid hitmarkers. It also has high rate of fire for a pump-action shotgun.

The BY15 can deal high damage to enemies, being able to take fights head on due to its tight pellet spread, which allows the gun to have more total damage at mid range. It has very fast rechamber speed, which accounts for its very high rate of fire. The BY15 is available on floor as Uncommon blueprints.

The BY15 in first person