The WA2000 can be found during "Loose Ends" used by Ghillie snipers, or in the weapons cache in the basement of the Estate in "Estate Takedown" with a Thermal Scope equipped. It can also be found on Shadow Company soldiers in "The Enemy of My Enemy." It is displayed in the "Museum" level as well. It is also used by enemy snipers, using normal scopes, wearing ghillie suits in "Hidden". in Estate Takedown, The WA2000 is also effective against Enemy Juggernauts, taking about 3-6 shots to kill one.

The WA2000 is unlocked at level 36 in multiplayer.

The WA2000's rate of fire is good. Being semi-automatic, the WA2000 shares the same firecap as the other sniper rifles, being able to shoot up to, and not exceeding, 1200 RPM. This rate of fire is highly flexible thanks to the semi-automatic configuration: players with good trigger fingers can fire as fast as they want or choose their optimal fire rate accordingly.

The WA2000's accuracy is quite good. It uses a scope with the same reticule as other sniper rifles, and its recoil is quite mild, pulling up and usually to the right. However, the WA2000's centerspeed isn't very good, at 800. This makes spam-fire ineffective on the WA2000 in the face of the M21 EBR unless in close range, as the WA2000's recoil is enough to befoul aim at a distance.

The WA2000's handling traits are fairly poor for a sniper rifle. The WA2000 has agonizingly slow switch speeds for a sniper rifle, taking 1.25 seconds to raise and drop the weapon when switching to or from the secondary weapon, and it has the slowest quick raise and quick drop speeds as well. The WA2000 takes a lengthy 400 milliseconds to aim, its hip-fire spread is ludicrously big, and its reload speed is quite slow for a sniper rifle, taking at least 2.5 seconds to reload the weapon. Out of the four sniper rifles, no sniper has worse stats overall for handling than the WA2000, and only the Barrett .50cal has a worse stat than it in the form of handling (a 2.8 second reload).

The WA2000's magazine capacity is poor, housing only six rounds. This gives the player only 24 rounds with their WA2000 upon spawning in. This makes the WA2000 the weakest sniper rifle in terms of effective ammo usage, as it only has four more starting rounds than the Intervention, which has an in-class smallest five round magazine, but the Intervention is much more likely to get a one shot kill than the WA2000. As such, Scavenger will be needed to use the WA2000 for extended periods of time.

The WA2000 has the typical sniper rifle attachments available to it. The ACOG Scope gives the player a wider field of view while aiming via a smaller zoom level, and makes the WA2000 sway slower. However, since the player can't manually steady their weapon with the ACOG Scope, the sway must be fought in order to land shots. The M21 EBR is much more suitable for the ACOG Scope due to its accuracy and overall nature suggesting usage at medium range. The Thermal Scope is a good choice on maps with poor visibility, but gives less definition on enemy targets, can be countered through Cold-Blooded, and is unsuitable for snow maps such as Sub Base.

FMJ increases the WA2000's power through walls, allowing for more efficient killing of concealed enemies. In general, FMJ is a good choice if the player is unsure what attachment fits their fancy.

Extended Mags doubles the WA2000's magazine capacity to twelve rounds, and makes the ammo loadout be shared between two magazines instead of four. This makes reloading much less frequent, and with the WA2000's poor reload speed, makes Extended Mags a good choice on the WA2000.

Due to how poor Stopping Power is on the WA2000, many players will find that they can use an alternative red perk because of it when not using a Silencer. Many players choose to use Cold-Blooded or Lightweight with the WA2000 in order to facilitate sniping, either through concealment from enemy detection or being able to run to sniping outposts quicker. This is the WA2000's biggest strength, as not only is the WA2000 not bound to stopping power like the Intervenetion and Barrett .50cal, but it's almost completely useless, unlike on the M21 EBR. Due to this, the WA2000 is by far the best sniper rifle to use when using an alternative red perk and no silencer, and one of the best sniper rifles for conventional sniping.

The WA2000; note the Mr. Yuk sticker on the scope cover

Reloading the WA2000; notice the fire selector on "safe"

The Mr. Yuk sticker found on the scope cover

The WA2000's only appearance is in "Victor Charlie", after detonating the C4. The Commando and WA2000 then replace the player's previous weapons, and both weapons are lost after entering the rat hole. The WA2000 is very powerful, and seems to kill in one shot anywhere to the body. However, on the Wii version, the player is equipped with a Commando and a M1911; the reason for this is unknown.

The WA2000 is a sniper rifle that appears in Call of Duty: Black Ops. It is unlocked at level 10.

The WA2000 has the lowest recoil of all sniper rifles in Call of Duty: Black Ops. Like the Dragunov, only shots to the head, neck or upper chest will kill in one shot. In Hardcore game modes, it will always be a one-hit kill.

It has a slightly faster centerspeed than the Dragunov, allowing for quicker, more accurate follow up shots. Notably, the stock scope (and medium variable) zooms to only 3.6x, compared to 4.8x for all other sniper rifles.

Among the disadvantages of the WA2000 is its small magazine size at six as one of the two sniper rifles that cannot kill in one shot to the stomach. (In comparison, the L96A1 and PSG1 have default magazine sizes of five, but have more reliable hit multipliers.) This, however, can be remedied with Extended Mag.

On the other hand, its lower default zoom may be both advantageous and disadvantageous. The WA2000 can be used closer to high traffic areas with slightly more peripheral vision, but its low zoom may prove troublesome when sniping across large maps like Array or Hazard. The Variable Zoom, in this case, would make it a more versatile sniper rifle, as long as the player aims for the chest or above.

The WA2000 behaves oddly with the ACOG Scope, and may be the sniper rifle best suited to the attachment. Due to the low amount of idle sway, the low default zoom level, and the good accuracy the WA2000 has, the loss of the ability to hold breath and some zoom isn't as detrimental as it is on other sniper rifles.

Also of note is that the WA2000 is arguably the best sniper rifle to suppress. Though it does lose its one-hit kill potential to the chest with a Suppressor equipped, its low recoil allows for quick, accurate follow-up shots. However, the Dragunov, which is also suitable for a Suppressor and deals the same damage when suppressed, has a higher default magazine (though with higher recoil).

Ultimately, the choice is up to the player to decide between low recoil or high default magazine capacity when choosing between the WA2000 or Dragunov suppressed, provided that the Warlord Perk is not taken in consideration.

Overall, the low recoil and fast centerspeed of the WA2000 result in a relatively easy to manage sniper rifle. 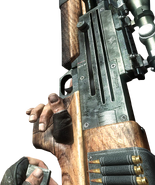 WA2000 in the Customization Trailer

WA2000 was cut from Call of Duty: Modern Warfare 3, however, texture and menu icon still can be found in game files.

Semi-Automatic
The WA2000 returns in Call of Duty Online as the Walther 2000.

The Walther 2000 in first person