For other uses, see WMD.

"Strike at the heart of Project Nova, deep behind enemy lines."
— Briefing

"WMD" is the eleventh campaign mission in Call of Duty: Black Ops set in Mount Yamantau, where Kilo 1 is told to find the biochemical weapon codename Nova 6.

Soviet base is in Yamantau, USSR.

Hudson and Weaver to lead team for S&D mission into the valley.

The player (as Mosely) is approaching an SR-71 Blackbird reconnaissance aircraft which sits on a runway in Beale Air Force Base in California. Whilst approaching the vehicle, the player's view is somewhat obscured by the high altitude flight suit helmet. The player can see personnel rushing to their positions or saluting Mosely and Neitsch. After approaching the vehicle, Mosely and Major Neitsch shake hands before boarding the aircraft. After requesting permission to takeoff, the player is told "You have the sky" by the control tower. Captain Mosely is then prompted to press a control to engage the SR-71's afterburner, and then pull back on the thumb-stick (or equivalent) to begin the ascent. After a short cinematic of the Blackbird (Codename: Big Eye 6) in the air, the screen cuts to a first person view of the rear cockpit, the player now acting as Major Neitsch.

The view is that of a thermal screen where the four man CIA commando team can be seen prone in the snow. As Neitsch, the player must assist the commandos in safely navigating past enemy Russian patrols. After successfully issuing the team an order, the screen fades, and the player assumes control of Hudson, one of the members of Kilo 1 below. Throughout the beginning of the level the viewpoint switches between Neitsch and Hudson as the squad combats the Russian patrols with suppressed weapons.

After the commando team reaches the end of the access road, the player, now Hudson, is found laying prone in the snow with his squad-mates on his flanks under some fallen branches, now armed with a crossbow. At that moment, a group of Russian soldiers on patrol slowly creep by north. Luckily, the squad is not detected and the troops continue on their path.

The objective is to proceed to a Russian communications sub-station, disable short-range comms, and locate and seize evidence of weaponized Nova 6 gas. Making their way down the snowy trails, Hudson's team is met by their first enemies. Using the crossbow, the player must pick off any targets while maintaining stealth. Continuing further down, the player is then required to hook up and manually rappel down the steep face of a mountain onto the metal roof of the sub-station. Rappelling a second time through the facility's windows with suppressed AUG prototype rifles, the CIA team is immediately met by a horde of Russian soldiers. Once the substation is taken, the objective is updated and the player is required to move to the "com-stat," the base's satellite ground station.

Going further down the mountain, the squad soon meets a group of enemies that require a bit more firepower. Using explosive-tipped crossbow bolts, the enemies may be quickly eliminated; or can be dispatched without alerting the other guards by using regular crossbow bolts on single-man patrols and then using suppressed weapons to quickly eliminate groups. After taking out the enemy troops and taking the storage shed, the player must continue to the power room.

Switching to an assault rifle, the player heads towards the power room. Moving behind their teammate, he opens a door and is immediately faced with an enemy, quickly silenced with a knife to the neck. If stealth has been preserved up to this point, no alarm will sound until you assault the control room. Opposition is heavy within the control room. After fighting their way through the Russian soldiers, the player finds the comm-relay and yanks the fuses from the box, rendering the station useless.

Once Hudson and his squad have cleared the mountain and completed the objective, the player follows the team out of the building and across a metal catwalk. A Russian soldier fires an RPG at the catwalk, causing Bruce Harris to fall off the side of the mountain, though he is later captured by Russian soldiers. Hudson must sprint jump over the gap. The detonation also causes a large avalanche. As the snow rushes behind, the CIA SAD team have no choice but to BASE jump down the mountain. With the aid of their parachutes they survive the jump.

The team will land just outside the main compound, but not far away, Russian personnel are burning documents in the open in an effort to eliminate evidence of research. The Kilo 1 eliminates them and because of its 20mm turret the wall crumbles. Eventually, they find their way to the control room. The room is rigged to blow and Kilo 1 are sealed inside, but the team is contacted remotely by Dr. Steiner - calling from the Rebirth Island research facility to make a deal for his life, in exchange for information on how to crack the numeric code that Dragovich uses in his sleeper cell broadcast. Steiner tells the player he is located on Rebirth Island. Once Steiner finished talking, the control room is unlocked and the player has three minutes to escape before detonation. The player must fight out and man a truck-mounted DShK machine gun until Weaver can hot-wire the truck to outrun the blast zone and the ensuing avalanche about to bury the facility and kill the remaining living people. 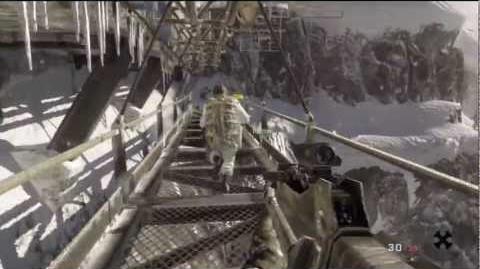 Concept art of the Blackbird's interior.

Concept art of the Blackbird.

Concept art of the complex.

View from the Blackbird at altitude.

Weaver, a member of the CIA team. 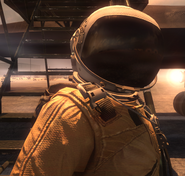 Neitsch getting ready to take off from the California airport.

A Soviet patrol. Notice that their rifles are actually AK-47s. These were going to be the Spetsnaz's main rifle, but was replaced by the FAMAS.

A CIA soldier in midair.

Weaver retrieving his knife from an enemy corpse.

Weaver proceeding through the facility.

Spetsnaz trooper getting pushed down the cliffs by a CIA member.

An early version of the CIA team.

Harris falling to his “death”.

Captain Mosely in the cockpit.

Hudson, breaching one of the command centers.

The whole mountain is coming down.

Weaver and Hudson before attacking the base. 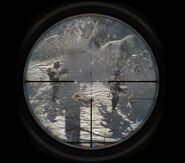 The loggers before Hudson kills them.

Hudson rappelling down the mountain.

Hudson planting a Semtex on the internal comms link.

WMD as it appears in the booklet that comes with the Call of Duty: Black Ops Soundtrack.