Call of Duty Wiki
Register
Don't have an account?
Sign In
Advertisement
in: Call of Duty: Black Ops Intel

The 3 Intel documents found in "WMD" regards USSR weapons and armament (including delivery for allied nations), sleeper-agent infiltration of the American mainland as well as Friedrich Steiner's biography.

I am writing to you today in the hopes that you can assist my team in ongoing research into Soviet weapons exports to the Communist nations of Cuba and North Vietnam. The information your office can provide will aid both planned and ongoing operations in the Caribbean, Latin America and Southeast Asia. Specifically, APLAA requests confirmation of the following points:

Any and all support and data you can provide in regards to the above point would, of course, be reciprocated as necessary.

Analysis of operational intelligence has shown that the Gorki-Korolev medical (GKM) Company based in Prague is being used to funnel the Soviet Chemical weapon NOVA 6 into North Vietnam and Laos using commercial cargo planes. We believe GKM to be the front company that supplied the NOVA 6 to suspected agents within U.S borders.

GKM is registered to one PAVEL GORKI, a cousin of Colonel Lev Krevchenko. The team is constructing a profile on Gorki, but we have confirmed that, following the end of WW2, he was involved in the massacre at Der Reise and the resulting standoff with American forces.

12 hours ago, FBI/SWAT teams (acting on Agency request) raided the office of 2 state-side companies with documented connections to GKM, BARBEUX INDUSTRIES and JAKATDAR IMPORTS (op reports can be found in TAB A). Unfortunately, the offices [were]where found empty. Both Barbeaux and Jakatdar are now verified front companies: The registered owners of these corporate entities died in the Korean War: Daniel Sutton and Noel Helmer (TAB B).

In addition, IRS records (TAB C) show a large number of Barbeaux and Jakatdar employees, none of which can be adequately identified or located. After cross-referencing against Customs records (TAB D), we now know that these UNSUBs entered the country under foreign labor visas at the behest of the aforementioned companies through various ports around the country: Los Angeles, New Orleans, Seattle, and other border regions. With our inability to locate these individuals, it would appear that we are dealing with Soviet sleeper agents gone to ground to await further orders.

We are currently analyzing the companies' records and tracking leads as fast as we can, but it seems that everyone associated with Barbeaux and Jakatdar simply does not exist.

Born into privilege and affluence, Steiner is a scientific genius on par with the greatest minds of the time at the time and by the age of 20 he had amassed a number of degrees and caught the eye of Schutzstaffel (SS).

Recruited into the third Reich's Wunderwaffe Program, he brought his expertise into the NOVA 6 studies, one of Hitler's most prized projects.

Steiner is untrustworthy and vindictive. Emotional ups and downs are the norm due to sleep disorders including insomnia and night terrors. Because of this, he is emotionally erratic, his actions unpredictable. 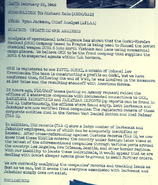 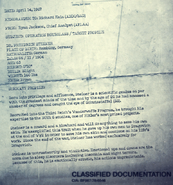 Intel No. 3
Community content is available under CC-BY-SA unless otherwise noted.
Advertisement