"The SS Honor Guards will defend the Reich with their last breath!"
— Reznov

"It's hell out there guys. It looks like a whole division of SS has moved in and they aren't giving up those crossroads."
— Manny Castillo

The Waffen-SS was a radical Nazi military force of the Third Reich. It is the armed wing of the SS (German: Schutzstaffel), an entity of the Nazi Party. The Waffen-SS saw action throughout World War II and served alongside the Wehrmacht, but were never formally a part of it.

In the original Call of Duty and its expansion pack, Call of Duty: United Offensive, Waffen-SS feature alongside the Wehrmacht. They wear a green oak leaf pattern smock and helmet with standard trousers and they are almost always seen protecting important zones.

A regiment of mechanized SS is mentioned in the beginning of the game in the mission We've Been Through Worse.

Waffen-SS appear as regular enemies, most notably in the last mission Chambois where they fiercely attempt to take the town. Despite this they are absent in the British campaign. They can be seen with their Panzergrendier green oak leaf camo uniforms and helmets, the "

" symbol is present on their collars.

A Waffen-SS soldier in CQC.

A Waffen-SS Soldier fighting the Polish on Hill 262. 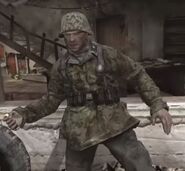 the german officer also seen in "the crossroads"

Waffen-SS troops make some appearances in Call of Duty: World at War. They are prominently featured late in the Russian campaign when the Red Army pushes deep into Germany. Their first appearance is at the end of "Heart of the Reich" near the main entrance to the Reichstag building. They are also the main enemies in the mission "Downfall", defending the Reichstag itself. In "Downfall", they are referred as the SS Honour Guard. One loyal Waffen-SS who survives an air strike on the roof of the Reichstag tries to kill the player with a Walther P38 at the end of "Downfall". Here they are dressed in black honor guard or brown shirt uniforms, usually with heavy bandaging also, some being seen without helmets or headgear at all.

While the German faction in Multiplayer is named the "Wehrmacht"; the Rifleman, Submachine Gunner and Bolt-Action soldier models take the appearance of Waffen-SS troops, wearing the distinctive woodland camouflage uniforms similar to their Call of Duty 3 models.

Some of the zombies in Zombies, mainly in the maps Nacht der Untoten, Verrückt, and Der Riese, are undead Waffen-SS soldiers. The logo of Group 935 carries the SS logo, even though it started out as multi-national organization (as seen in the Group 935 manual). This was changed with later installments.

An SS soldier, last defender of the Reichstag.

In the level "Downfall" in Call of Duty: World at War the following can be heard from the fanatically loyal SS troopers: 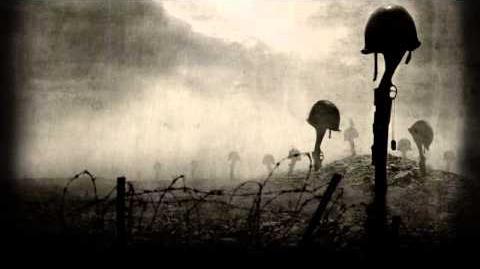 The lead of development for Nova 6, Friedrich Steiner, was recruited into the German military as an SS officer. The player also faces off against remnants of the SS after the end of the Second World War in the mission "Project Nova".

Some of the zombies in the Zombies mode maps Kino der Toten, Nacht der Untoten, Verrückt and Der Riese are undead Waffen-SS soldiers.

The Waffen-SS appears throughout the campaign of Call of Duty: WWII. The Waffen-SS first appear in the mission "Death Factory" as they storm the player's position on the bridge in the first half of the level. They are distinguished by the oak leaf uniform camouflage. Like with the Wehrmacht, the uniforms of the solders in the campaign depend on the kind of weapon they use, with SMG soldiers wearing field caps, Riflemen helmets and trenchcoats, but Shotgunner wear gasmasks, looking similar to the expeditionary division in multiplayer.

A Waffen-SS Soldier in Call of Duty: WWII

A Waffen-SS Officer in the Air Base

A Waffen-SS Soldier with Shotgun