Call of Duty Wiki
Register
Don't have an account?
Sign In
Advertisement
in: Call of Duty: Black Ops Gametypes 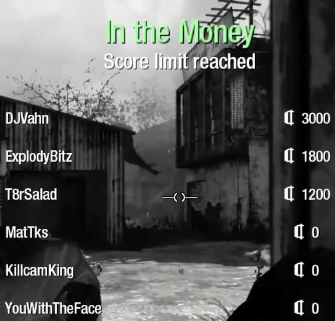 "In the Money!"
— The Black Ops announcer, when a player scores third place or above in a session.

The top three players at the end of the match are "In The Money", meaning that they earn CoD Points (50 percent of the wagers go to the first place player, 30 percent for the second, and the last 20 percent goes to the third top player), while the remaining players earn no CoD Points. In the event of a tie between places, the players will assume the average between the two places that were tied (i.e. if there is a tie for second the two players will receive the average of 30% and 20% of the pot, which would be 1500 in a 1000-point wager game). If there is a tie for third, then the 20% of points allotted to third place will be split upon the tying players, which usually means them losing some (but not all) of the money that was wagered that match.

Lobbies are randomly generated, and the player can't have a party in the Weekend Gambler and High Roller playlists. Players will be able to involuntarily use some killstreaks,[1] such as in Sticks and Stones where a Spy Plane is always online, or One in the Chamber where radar is active when there are only two players left. Players cannot earn XP in wager matches.[2] Bigger maps also have sections blocked off, and some have specific routes closed off (e.g.: on Launch the area under the rocket is inaccessible).

If the host of a Wager Match quits out of the game itself, or turns off their console, rather than just leaving the match, the game is unable to migrate the host. The wager match will end and all CoD Points will be refunded to everyone except the host.

Kills and deaths in Wager matches do not count towards the player's Combat Record in Player matches.

Wager Matches are separated into three different playlists. Each playlist has a different buy-in cost, and may restrict players from forming parties.[3]

One of Three playlists in the Wager Match category. It includes all four of the wager game modes. Ante Up has a low buy-in cost of 10 CoD points, and players are allowed to form parties.

12 for 3rd. When the game is doubled down, the stakes raise to twice the respective amount. 1st place would win

Another playlist under Wager Matches. It includes all four of the wager game modes. Weekend Gambler has a medium buy-in cost of

1000, and players are not allowed to form parties.

The last, most risky playlist under Wager Matches. Pro Gambler mode is enabled, which incorporates the four wager game modes. High Roller has a very high buy-in cost of

10,000, and players are not allowed to form parties nor allowed to have a split-screen player.