Call of Duty Wiki
Register
Don't have an account?
Sign In
Advertisement
in: Stub, Call of Duty: Modern Warfare Characters

"You survive. Whatever it takes. Never back down."
— Walid's last words to Hadir and Farah Karim

Walid Karim is a character featured in Call of Duty: Modern Warfare.

He is the husband of Fatima and the father of Farah and Hadir Karim. During the Russian invasion of his country, Fatima and Farah were buried under rubble. Farah was saved by rescue workers, but they were unable to save Fatima, much to Walid's distress. Walid questions where Hadir is. Farah tells her father that Hadir is still at home, studying. A fighter jet flies over and bombs the surrounding area, causing everyone nearby to panic. Walid carries her away from the chaos and tells her that they need to go find Hadir and leave town.

Walid meets up with his friend, Shadi, who warns him that Russian soldiers have arrived and are looking for resistance fighters. Shadi urges Walid to escape as soon as possible. As Farah and Walid head down the street, Russian soldiers arrive in a truck and start shooting at the civilians. Walid narrowly escapes with Farah and they continue on their way home. More Russian soldiers begin deploying poisonous gas on the streets. Walid quickly enters the house and Hadir greets them, telling his father that he followed orders to close the windows when the bombs fell. Walid commends Hadir and gives a gas mask to Hadir as well as a pair of mobile phones for the children.

As the family prepares to leave, J-12, a Russian soldier who is wearing a gas mask, breaks into the house. Walid asks J-12 to leave his family and alone and J-12 refuses, pointing his AK-47 at him. Walid, seeing no other choice, hurls a backpack at the soldier and the two begin to fight hand-to-hand. J-12 then pulls a knife out to stab Walid, but Hadir intervenes. The muscular soldier knocks him to the ground with ease, but this allows Walid to get ahold of the knife and stab J-12 in the gut. The enraged Russian soldier beats and throws Walid back. Walid urges Farah to run and hide as J-12 grabs his AK-47 and shoots Walid repeatedly, causing him to pass out.

His children were forced to defend themselves as he was incapacitated, and after a brutal battle, they killed J-12. Once the family's home was safe, Walid's children surrounded him as he died from blood loss. With his last words, Walid encouraged his children to stay determined.

The death of Walid would later play a large part in the motives of Farah as she later found herself as the Commander of the Urzikstan Liberation Force, seeing the Russian Army as terrorists after she witnessed the atrocities against her family. 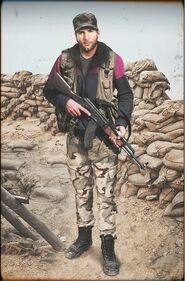 A picture of a younger Walid holding an AK-47
Community content is available under CC-BY-SA unless otherwise noted.
Advertisement