For the rifle with a similar name, see Walther G41.

"Issued to German NCOs and officers as a replacement for the more costly [sic]. 9mm 8-round clip. First use of double-action lock."
— Description

The Walther P-38 (referred to as Walther P38 in the Bonus Materials) is the standard pistol of the German and Italian teams in multiplayer. It cannot be found in the campaign, as no handguns appear in the campaign.

"9mm pistol. Sidearm issued to the German military in WWII. Safer, more reliable and easier to operate than the Luger it replaced. 8 round magazine. Effective range of 25 meters."
— Bonus materials description

The P-38 appears in Call of Duty 3, where it is only available in multiplayer.

The P-38 appears in multiplayer as the standard sidearm for all Axis classes. It has low recoil and a speedy reload time, but is relatively weak. It takes around 4-5 shots to kill an enemy, and the magazine only holds 8 rounds. Therefore, it is very difficult to kill multiple enemies with a single magazine of the P-38. It should only be used strictly as a backup weapon. However, its magazine size does mean that it holds an advantage over its equivalent, the Allies' Colt .45.

The P-38 in first person

The Walther is the same as the other non-Magnum pistols except for its appearance and reload times. It has the second slowest mid-magazine reload and the slowest empty reload. It is first seen, and can be used in the mission "Vendetta". This is the weapon that Dimitri Petrenko is severely wounded with by the last SS Honor Guard soldier on the Reichstag at the end of "Downfall". It also has no visible recoil. It is hard to find it anywhere on the map, the best chance to obtain it is by putting a German soldier into Last Stand by wounding him, wait for him to pull it out, and then finish him to claim the gun. This must also be done in order to re-stock ammo. Near the start of the mission, "Vendetta", when being sniped across the river, there is a Walther P38 on the table next to the sofa and on the table to the right of the doorway after the player goes up the stairs. This is a good opportunity to get a sidearm. The achievement/trophy "Gunslinger" is unlocked for killing Heinrich Amsel with the P38 found on the table. This is only possible on Recruit difficulty.

The P38 can be obtained in Nazi Zombies through the developer console on all maps. It does 80-100 damage, making it weaker than most weapons, but still five times stronger than the M1911. The Walther is rather effective on lower rounds, doing as much damage as the Kar98k and being semi-automatic, but is pointless considering the player has to use the console to get access to it, and would also have access to weapons like the PPSh-41, Ray Gun, and Wunderwaffe DG-2. It cannot be upgraded using the Pack-A-Punch on Der Riese.

The Walther P38 in World at War

The Walther P38 in third person

The Walther P38 also makes a brief appearance in Call of Duty: Black Ops during "Project Nova", when Viktor Reznov encounters Friedrich Steiner holding a Walther P38. Steiner can later be seen with the P38 on him during the remainder of the level, even when he is carrying a Mosin-Nagant; the P38 seems to be part of his character model. Its pick-up icon can still be found in the game files but its texture and 3D files are absent. It can be used in multiplayer via console commands, where it retains the same stats as in World at War.

Steiner and his P38

The Walther P38 returns in Call of Duty: WWII, where it is featured in The Resistance event, now referred to as 9mm SAP.

Unlike the other three weapons added as part of the event, the 9mm SAP's base variant isn't unlocked by completing a special order from Major Howard in the Headquarters. Instead, it is unlocked by reaching Prestige 1 of the Resistance Division. The 9mm SAP initially lacked a variant that could be obtained from a collection. However, a collection variant was added with the second update for The Resistance event on February 13th, 2018.

Damage is similar to the P-08, requiring 3 shots to kill in close to medium ranges and 5 shots to kill at long ranges. Recoil is also low, being able to accurately hit enemies at medium ranges and with practice, long ranges. Iron sights are also clear, but see a step up from the P-08, which had a toggle-lock system which blocked the sights for a few milliseconds after firing a shot. Ammo capacity is second best of all pistols, tied with the P-08. These traits make the 9mm SAP a good backup weapon in case the player's primary does not fit the current situation.

With the Duelist basic training, the 9mm SAP will be able to improve its close range capability at the cost of medium and long range accuracy. Extended Mag and High Caliber make the 9mm SAP more viable, with the Tactical Knife and Suppressor can help to handle enemies without gaining attention. Quickdraw is rather redundant as handguns already aim down the sights very quickly.Full Metal Jacket is also pointless, seeing as the 9mm SAP has poor penetration and other attachments give a more tangible benefit. Steady Aim can be used in lieu of attachments unlocked later or with Duelist. Advanced Rifling can help to increase the 9mm SAP's 3 shot kill range.

The 9mm SAP was added to Zombies with the update as well, being obtainable through the Mystery Box in The Final Reich, Gröesten Haus, The Darkest Shore and The Shadowed Throne for 1000 jolts and as of The Tortured Path, the starter weapon Waffenbox for 500 Jolts. It can also be selected as the player's starting weapon as of the second Resistance event update on February 13th, 2018. Damage is similar to the P-08, dealing low damage in the early waves which allows players to fire two bullets per wave per zombie (except for The Tortured Path) in order to allow the player's melee attack to finish off the zombie, gaining the player a good amount of jolts. With Kugelblitz, the 9mm SAP will be able to kill zombies in a few shots in the early waves.

When upgraded via the Ubersprengen or by Mk. II Freefire special mod, it becomes the Grey Ghost, having a drastic increase in damage, more ammunition, and having similar qualities to a shotgun, with multiple pellets being fired when shooting. These pellets have high damage and have unlimited range, with a large spread when hipfiring and tight spread while aiming. Akimbo or a combination of Extended Mag, High Caliber, Steady Aim and Full Metal Jacket or Advanced Rifling can be used to decimate hordes of zombies and high health enemies such as the Wüstling, Brenner, Meuchler and the boss enemies in The Tortured Path. The 9mm SAP, as well as the Reichsrevolver, Enfield No. 2, Gewehr 43, GPMG, Sten, Orso and Volkssturmgewehr, are the only weapons to not have their attachments, variants or customization reset when prestiging in Nazi Zombies. 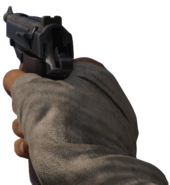 The 9mm SAP in first person 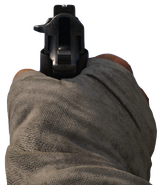 Inspecting a side of the 9mm SAP