For the semtex-firing variant, see MK32.
For the soundtrack, see War Machine (soundtrack).
For the map pack, see The War Machine.

A War Machine is briefly seen in Modern Warfare 2: Ghost. In the comic "Dead Won't Leave", Marcus Washington uses it to blow up a room Ghost was in. However, Ghost manages to escape before he does so.

The only appearance of the War Machine

The War Machine (referred to as M32 in the game files) is unlocked for the single player loadout by completing five challenges in Old Wounds. It holds less ammo than the MM1 Grenade Launcher, but has a faster rate of fire and a rangefinder sight. It is a good choice for missions where large groups of enemies are encountered, otherwise a rifle-mounted launcher would be better as it frees up a weapon slot.

Appearing as a Scorestreak, this grenade launcher comes with six grenades in the cylinders and six in reserve which are reloaded individually, for a total of 12 grenades. Rewarded to the player after 900 points (or less if Hardline is equipped), it will only disappear after all of its ammo has been expended, like the Death Machine.

The War Machine is a very powerful weapon due to each grenade being capable of one-hit kills and its thorough reserve of 12 grenades albeit a slow one due to the requirement of manually reloading each shell. However, Flak Jacket users are highly resistant to the explosives, usually requiring two or three hits, but never more than four.

"Given my admittedly limp throwing abilities, I welcome this more efficient means of explosive propulsion!"
— Marlton Johnson, when obtaining the War Machine in Die Rise.

In Zombies, the War Machine is available in the Mystery Box in all maps, with the exception of Mob of the Dead. Unlike in multiplayer and singleplayer, the grenades do not explode on impact (instead just bouncing off walls) and has a fuse delay. In addition to this, the rounds do little damage, requiring multiple explosions to kill during even the first ten rounds, and the reload speed is extremely slow. The explosions can stun and damage the player as well. The grenades can damage zombies on impact, although this type of damage is rather weak. Also, the grenades bounce wildly, unlike conventional grenades, making accuracy with the War Machine highly dependent on luck. In TranZit, the lava pools defuse the grenades and make them not explode, further reducing the effectiveness of the weapon. Overall, the War Machine is very inefficient, as its capabilities in killing zombies are offset by its cons to the player, including movement speed loss and splash damage. Should the player choose to use the War Machine, PhD Flopper (available via Der Wunderfizz in Origins or as a persistent upgrade in Buried) is extremely useful as it negates the self-inflicted splash damage completely, though the player should be aware of not hurting The Giant unless he is no longer needed. Speed Cola also helps with the lengthy reload speed, and Juggernog can work as a less effective alternative for PhD Flopper on maps where the latter is not available.

Once Pack-a-Punched, it becomes the Dystopic Demolisher and the grenades explode on impact, in addition to dealing greater damage and reloading all six grenades at once. This makes the weapon much more useful, as there is always a certain chance of killing a zombie in the low to middle rounds and many of the War Machine's flaws (non-lethal grenades, wild bouncing, etc.) are removed. However, splash damage is still a problem, so it is advisable to only use the Dystopic Demolisher when in a wide space, the player has PhD Flopper or when absolutely necessary.

The War Machine in first person 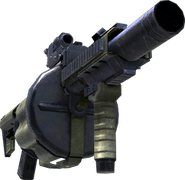 The War Machine being held

Render of the War Machine

A side view of the War Machine

The War Machine seen in a possible ending scene

The War Machine returns in Call of Duty: Black Ops III as a launcher in campaign and as a Specialist Weapon in multiplayer.

The War Machine is unlocked at level 15 as a secondary weapon, classified as a launcher. It's useful for taking out mass groups of enemy Grunts, usually killing many with a single shot.

In ideal situations, a player could utilize the bouncing grenades to score constant multi-kills in a small environment, providing large score boosts.

The War Machine is Battery's Specialist weapon in multiplayer which can also be used by Blackjack using his Rogue ability. Unlike in Black Ops II, the grenades fired from the War Machine will only explode on impact if they hit an enemy.

If the grenade hits a surface instead of an enemy, it will break down into three smaller grenades, which will slightly bounce then explode on impact.

If any of the grenades impact on an enemy, it is an instant kill, and the three smaller grenades also deal high splash damage, making the War Machine devastating in close to medium range. The War Machine holds eight grenades, but has no reserve ammunition in multiplayer.

It is most useful in objective based gamemodes as enemies tend to group around objectives, allowing the player to quickly clear out large groups of enemies.

If the player bounces the grenades off a wall and it hits an enemy, their arms and legs will immediately be blown off and splatter blood.

First-person view of the War Machine

Battery holding her War Machine in the selection screen

The War Machine returns in Call of Duty: Black Ops 4 as a Specialist Weapon exclusive to Erin "Battery" Baker. It's also available in Blackout.

The War Machine is similar to it's Call of Duty: Black Ops III counterpart, but with 2 less grenades, and the removal of the cluster grenades that split upon impact. It also feeds from a belt instead of a cylinder.

The War Machine being fired by Battery

Concept art of the War Machine.

The War Machine returns in Call of Duty: Mobile as an Operator Skill.

The War Machine fires grenades that explode and kill all nearby enemies. However, thanks to a recent balancing patch, explosive radius damage was reduced, meaning enemies that are somewhat far (e.g. >5m) will not be killed.

In Battle Royale, the War Machine can found in Airdrops, or in Vending Machines in the Isolated HQ (Aerial Platform). Since the Season 11 update, the ammunition has been changed to Ballistic Expert, allowing it to be reloaded. Like its multiplayer counterpart, it has been nerfed to produce less-than-reliable damage, resulting in a spammable yet somewhat weak special weapon.

A variant called the Anti-Tank War Machine can be found in the Tank Battle game type of Battle Royale since 2021's Season 2: Day of Reckoning. It has a noticeably lower rate of fire than the classic Battle Royale's War Machine. A mounted version is also available in Tank Battle as a secondary weapon for tanks.

The weapon appears in Call of Duty: Modern Warfare as the MGL-32 Grenade Launcher, and is exclusive to campaign, Special Ops and Warzone.

A variant firing incendiary grenades can be found, referred to as the "MGL-32 Incendiary Launcher". Additionally, with the Demolition role in Special Ops, the player can equip an MGL-32 that fires Thermite rounds.

The MGL-32 first appears in the weapons locker at the end of "Proxy War", and is Kyle "Gaz" Garrick's secondary weapon in "Into the Furnace".

Bell uses the War Machine in "The Final Countdown" when assaulting the Solovetsky Islands.

The War Machine appears in Multiplayer as a Scorestreak, awarded at 4,000 score. It contains 12 grenade that explode on impact upon contact on any surface. Unlike prior games, the War Machine can be holstered without consequence as long as there is ammo remaining; the War Machine will only be lost after all ammo has been expended or the player using it has been killed while holding it.

All 12 grenades are loaded into the launcher, eliminating the need to reload.

The War Machine is one of the few scorestreaks available within Zombies where it is craftable for 100 High-End Salvage or from the Mystery Box where it's classed as a Rare tier item, it retains the same properties as the Multiplayer counterpart. It deals massive area damage at a great pace at the cost of being limited to an unrefillable 12 rounds while also being expensive to craft and hard to come by via the Mystery Box.

The War Machine in "The Final Countdown"

"Equips a semi-automatic grenade launcher with a fixed number of grenades. Persists through death until ammo is depleted."
— In-game description

The Warmachine returns in Call of Duty: Vanguard as a Killstreak.

It can be found at the top of the hill in "The Battle of El Alamein", of which it has 6 ammunition in it and cannot be recharged.