Get to the Seaknight LZ for extraction. 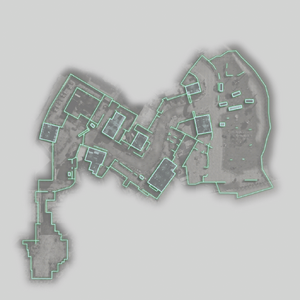 For the callsign of a tank, see War Pig (tank).

"Lt. Vasquez, this is Outlaw-Two-Five. The task force is moving in to capture Al-Asad. It's all hands on deck for this one so get on board, over."
— Outlaw-Two-Five

"War Pig" is the ninth campaign mission in Call of Duty 4: Modern Warfare. The player takes control of Paul Jackson who along the other marines try to Lt. Vasquez's secure War Pig through enemy territories.

The level starts in the bog in which "The Bog" ended. War Pig has been fixed by engineers and now the squad has to push forward into the enemy territory. After defeating a counterattack on their position, War Pig and Lt. Vasquez's squad move down the street. After clearing the main street, the team eliminates the enemies which have gathered in two buildings which are heavily guarded with troops and machine guns. After killing all enemies and destroying an enemy tank, Vasquez and Sgt. Paul Jackson leave to finish off Khaled Al-Asad.

The player will spawn just behind a destroyed car at the southern edge of the Bog. Since the OpFor is assaulting the area, the player will be pressed into action fairly quickly. A good idea for the player is to duck down underneath the car for some cover to work with. Running straight to the enemy lines won't do too much good here, so the player should stay low for at least a minute or so. Beside the car on the left is a Dragunov and on the right side of the car is a M249 SAW. The Dragunov should be best as a secondary weapon, for the time being at least. The player should be sure to get the ones on the far right and in the bus straight ahead. When the coast is clear on the right, a good idea is for the player to switch to the M249 and mop up the rest.

About halfway to the bus, a Marine will inform the squad that an enemy air assault is moving in. As soon as this is said, the player should sprint the rest of the way to the bus and swap the secondary out for an RPG. Using said RPG, the player should take out the first helicopter to fly in, and then proceed to do the same with the other. If done correctly and quickly, resistance in the bog should be negligible at this point. Then the player should swap the RPG back to the M249, finish off any remaining hostiles and move up to the building complex with the squad.

Swap the M9 for the Dragunov beside the car.

Pick off the hostiles in the bog and in the bus.

After the way is clear, swap the SVD for the M249 and move up.

Mop up the rest of the tangos in the bog.

Start sprinting to the bus the instant the Marine informs the squad of the air assault.

Head around the corner of the bus.

Swap the secondary for an RPG.

Take aim and fire at the first chopper that stops.

Reload and launch the second rocket at the other helicopter, pick up the M249 again.

Follow the squad and finish off the remaining resistance.
Add a photo to this gallery

The remainder of the firefights will take place in this building complex, which can be divided into two sections. The squad will be entering the first one, and it is easy to get decimated here if the player isn't careful. The player can use the tank as a shield, but should avoid getting too close to that right side. It won't be long before the car cars catch on fire and explode. They player should watch the enemies on the rooftops to the north and north east. They should spawn about 10 or 20 seconds in, and they can really put a fix in the plan if not taken out fast. There is a small break in a stone wall off to the left side of the tank, and a lot of the squad will try to get through there. Get a good vantage point, and gun down the tangos in the surrounding area, the first floor of the building, and the second floor of the building. It may seem like a lot, but remember that the tank is there for cover.

Once Marines start to take control of the wall ruins area, War Pig should state that a tank is moving up. Make sure the M249 is ready and head on over to the building on the opposite side of the street. Once at the top of the stairs, the player shoot into the door, killing the enemy behind it and opening the door. Another hostile should be inside that room, so the player should be cautious. However, it's not over yet. In the room off to the left, there is a hostile in the closet and another that will rush forwards from the balcony. The player should kill them both. The building will be clear for the time being, so he player should use this time to swap their secondary out for the Dragunov on the balcony. Then the player should head over to the balcony in the other room, and pick off some enemies in the building to the right. It's possible that another hostile will come running up the stairs if the player isn't fast enough. Once the player gets two or three kills, they should be prepared to knife him if he comes. They player should then check the stairs to see if there are any more enemies coming and resume sniping. Once all enemies are dead in the building straight ahead, the player should change his/her angle of attack and kill the remaining hostiles in the bus. The enemies in the bus will respawn multiple times, so it's best if the player just kills two or three and moves up with the squad.

Stay behind the tank and pop out to shoot the hostiles.

This wall opening is where much of your squad will be - the guys in the building respawn fast so just take them out so you can move up.

When the tangos on the rooftops spawn, take them out ASAP.

This guy will particularly hurt you with his nasty RPG, life will be easier with him out of the way.

Return to the opening and just keep the area in front of the building clear, never mind about the guys inside.

Once the Marines start to take control, sprint to the opposite side with the other large building and head up its stairs.

Unload lead into the door until it opens.

Swap your secondary for the Dragunov on the balcony.

Pick off the resistance from the balcony on the other side of the door you shot through.

Take out some guys in the bus and jump off the balcony.
Add a photo to this gallery

Go down the stairs and move up with the squad. Since two MGs will be laying down quite a bit of fire, crouch behind the dumpster that Vasquez will kindly push forward. Use some grenades so that the cars are already in pieces before making way towards the building. Be sure to take out the MG gunners as well. Once the area is clear, move up and enter the building. Reload while heading up the stairs and pick off the final hostiles moving up in the street. Jump down the ledge and follow the squad to the extraction zone where a helicopter is waiting.

Gun down the tangos on the first floor.

Veer right towards the side stairs.

Throw a flash through the door.

Finish off the hostiles on the second floor and head into this room.

You'll be under heavy fire, so switch to your M4A1 and throw a flash down to the ground.

Kill the OpFor on the second floor first, then jump off the balcony and head over where your squad is huddled.

Get close to the wall's opening and throw a flash inside the building.

Once you've killed the tangos on the first floor, head up the stairs to the second.

Wait for the hostile to drop the grenade and throw it right back at him.

Pick up an RPD and head down the stairs and out the door.

Use the dumpster as cover to finish off the tangos in the street.

Be sure to take care of the the MG gunners.

Follow your squad into the building and up the stairs where you can take care of the remaining hostiles.

Laptop 14
Add a photo to this gallery

) - Complete "The Bog" and "War Pig" on Veteran difficulty.

Retrieved from "https://callofduty.fandom.com/wiki/War_Pig_(mission)?oldid=2065103"
Community content is available under CC-BY-SA unless otherwise noted.