John Price with a Desert Eagle

"Alright. We've traced the delivery freighter to an outfit in Bosaso, Somalia. It's run by a nasty piece of work named Waraabe."
— MacMillan in the cutscene before "Return To Sender".

Waraabe is a character and the tertiary antagonist in Call of Duty: Modern Warfare 3 seen in "Return To Sender". He was the commander of the African Militia in Somalia.

Waraabe was born in Magadishu, Somalia in 1982 or 1983. Later in life he joined the Africa Militia. His skills in combat and strategy quickly helped him rise through the ranks until he was eventually the leader of the Militia. He was a successful commander within the Militia, and under his command the militia gained more money and infamy through terrorism, commercial piracy, human trafficking, arms dealing, illicit drug smuggling, and criminal homicide. His actions made him wanted by INTERPOL. His influence spreads across Somalia, Sierra Leone, and possible elsewhere in Africa. He also has taken over parts of Africa and is part of a genocidal conflict between some unknown ethnic groups.

Waraabe was contacted by the Ultranationalists and made an alliance with one of their leaders, Vladimir Makarov of the renegade Inner Circle faction. He became affiliated with Fregata Industries and helped smuggle conventional and chemical weapons to the Ultranationalists forces in Europe both Inner Circle insurgents and Russian Military personal.

His aid to the Russians ended up causing a series of chemical weapons attacks across Europe which left the continent defenseless and was later besieged and momentarily overrun and conquered by the Russian Military which poured into Western Europe and made it as far as the French capital of Paris itself. Following the attack, an investigation was done and Waraabe was found out to have ties to Makarov and helped supply him and the other Ultranationalists with the chemical weapons that left Western Europe open and exposed to the Russian invasion.

On October 8th, He was commanding his local militia in Bosaso, Somalia when Task Force 141 came searching for him due to his involvement in the creation of the chemical weapons Vladimir Makarov used in Europe.[1] His large amount of troops proved troublesome at first, but with the aid of Nikolai's helicopter, they were able to overcome them. He was caught and interrogated by Soap, Price and Yuri.

When Waraabe was captured, he demonstrated fear and pleaded for his life. Price threw a gas canister on the floor, commanding the other two to put gas masks on, and giving a spare mask to Waraabe only if he told them about Makarov. He quickly and nervously revealed that his contact was a man "Volk" in London and that he never met Makarov. When he revealed the truth about Makarov's shipment, Price tossed a gas mask to him, but proceeded to execute him with a Desert Eagle, saying "This is for the boys at Hereford".

After Waraabe's death, his entire army tried to avenge him by preventing Price, Soap and Yuri from escaping, but his army failed to kill them. 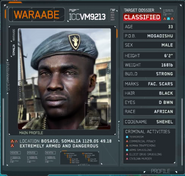 Waraabe's photo can be seen on the bottom left.