For the Call of Duty: Infinite Warfare remake, see Heartland.

Warhawk is a multiplayer map in Call of Duty: Ghosts.

Warhawk is set in the evacuated streets of Morrowville, Nebraska after the town had been ravaged by mortars.

Warhawk is a diverse map supporting many different styles of play. Medium-to-long range engagements are frequent in the main road, as players must watch all openings from which opponents can emerge, including the three second-story windows overlooking the map. These three second-story spots allow for a player with a sniper rifle, marksman rifle, or LMG to quickly dominate by picking off people in the street. One of these such outposts has only one entrance and provides a view of almost the entire street, making it a popular location.

Away from the main road, however, play becomes much more close-range. A player with a SMG or an assault rifle easily dominates the back streets. Shotguns tend not to work particularly well because most engagements in this area, albeit close-range, usually lie outside a shotgun's effective damage range.

A skilled player using a marksman rifle can rule both combat aspects of Warhawk. Steady Aim allows a player to squeeze off quick shots from the hip to take care of enemies at close range, while an optic such as the Thermal Hybrid allows for medium-range to long-range domination. The MK14 EBR usually works best for this style of play, as its high damage per round can kill enemies quickly at both close and long range. The Burst Fire attachment augments this capability by allowing a player without a particularly quick trigger finger to excel at close range, while not having a major impact on long-range engagements. 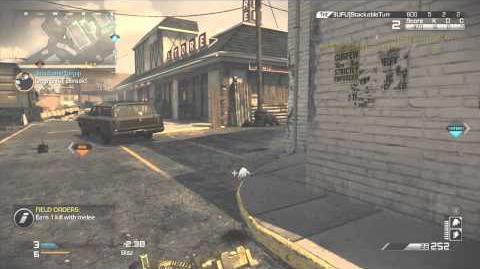