Warhorse Five-One was the callsign of an MH-53 Pave Low in Call of Duty: Modern Warfare 2. It is operated by Shadow Company. Its only known appearance is in the level "Endgame", but it may also have been seen in "Loose Ends". Warhorse 5-1 can also be mentioned in background radio chatter throughout the game.

In "Endgame", it is supposed to extract General Shepherd from the river outside Site Hotel Bravo; however, it gets shot down by Captain Price. All of its occupants, including Shepherd, are killed, either by the crash or by John "Soap" MacTavish. One of the soldiers from the chopper is seen crawling on the ground next to the Pave Low, and another is seen lying on the ground trying to shoot Soap; however, his G18 is out of ammo. 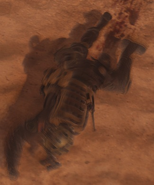 A wounded crew member of Warhorse 5-1 crawls away from the wreckage.

Another survivor tries to kill Soap, though his pistol doesn't have any ammo.

Another view of the crashed Warhorse 5-1, seen via noclip in level "Museum"
Add a photo to this gallery

Retrieved from "https://callofduty.fandom.com/wiki/Warhorse_5-1?oldid=2336832"
Community content is available under CC-BY-SA unless otherwise noted.