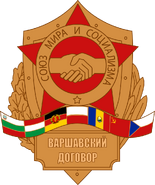 Insignia of the Warsaw Pact

Map of the Warsaw Pact's members
Community content is available under CC-BY-SA unless otherwise noted.
Advertisement