Sergeant Waters was a British soldier assigned to 3 Troop of the 2nd SAS during World War II as featured in Call of Duty.

In 1944, he parachutes in with Price, Evans and another squad to sabotage the Eder Dam and extract Evans. During Sergeant Evan's first action as an SAS soldier, he assists Captain Price acquire a German Opel Blitz truck to extract Evans from the Eder Dam after his sabotage. To their fortune, there was a shipment of Panzerfaust 60s in it which would help them leave the area alive. He continues to cover Price as he uses his driving skills to leave the area towards an airfield. When they arrive, Waters gets on a MG-42 and covers Evans from infantry fire while he takes out Stukas attempting to destroy their position. When the second element of the SAS team gets a Focke-Wulf 200 Condor working, he extracts with the rest of the group.

In the fall of 1944, Waters, Price and Evans infiltrate the Battleship Tirpitz off the coast of Norway. Waters protects the boat that they had hijacked from Kriegsmarine troopers while Price and Evans commence sabotage and espionage to the ship. Captain Price is killed to the lament of Sergeant Waters. He drives them out of the area.

In February 1945 in Germany, he parachutes in with Evans on a mission to eradicate a V-2 launchpad named Batterie #445 located in Burgsteinfurt, Germany. Waters uses his Bren to support Evans as the latter plants bombs on the Flakverling guns. The duo then meet up the rest of the team, and head north to eliminate the V-2s. He orders Evans to enter the bunkers and refuel the rockets, so that the remaining explosives could blow it up. After its destruction, the team exfiltrates. It is unknown what happened to Waters, but he most likely survived. 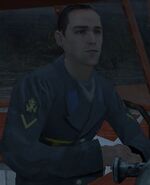 Waters on the Battleship Tirptiz

Waters with his Bren LMG 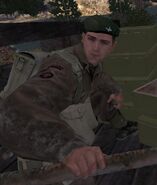 Retrieved from "https://callofduty.fandom.com/wiki/Waters?oldid=2468619"
Community content is available under CC-BY-SA unless otherwise noted.