"Do you smell the rotting flesh cook?"
— Samantha Maxis using the Wave Gun

Despite being considered as a single weapon, the weapon can be found in two distinct forms: the Zap Gun Dual Wield and the Wave Gun. It is possible to switch between both variants by hitting right on the D-Pad on console or 5 on PC.

Similarly to other Wonder Weapons, the Wave Gun can be obtained in the Mystery Box or from a potential weapon power-up that appears as one of the QED effects. By default (when acquired or switched to), the gun is found in Dual Wield configuration, a variant named the Zap Gun Dual Wield. The Zap Guns fire red balls of electricity that kills zombies instantly upon contact, similar to the Wunderwaffe DG-2 although it only kills the zombie it hits, and no others are affected. The Dual Wield Zap Gun will always be a one-shot kill to any zombies at any range. Due to its Dual Wield nature, Deadshot Daiquiri is a helpful perk-a-cola to use in tandem with the Zap Gun, as it increases hip-fire accuracy, allowing the player to accurately hit zombies at longer ranges.

After hitting right on the D-Pad or 4 (default on PC version), both guns combine to become one weapon, named the Wave Gun. This variant can be aimed and fires a purple beam that causes zombies caught in the blast radius to cough up blood, then slowly expand and explode, resulting in an instant death at any round. This weapon is very useful at higher rounds due to its large magazines, the ability to change to fire mode instantly as well as its infinite damage. However, it is worth noting firing the Wave Gun at zombies from behind often does not affect them.

A yellow and red Wave Gun. In the final version it is red and blue.

Zap Gun Dual Wield, yet again in the yellow and red concept.

Zombie just after being shot by the Wave Gun.

Effect of the Wave Gun.

Close view of the Wave Gun from the Mystery Box.

Concept art of the Wave Gun.

The effects of the Wave Gun in Black Ops 3.

An entire group of Zombies exploding from the Wave Gun in Black Ops 3.

Wave Gun effects on a Hellhound. 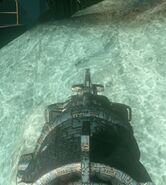 Effects of the Max Wave Gun in Black Ops 3.
Add a photo to this gallery

Retrieved from "https://callofduty.fandom.com/wiki/Wave_Gun?oldid=2542472"
Community content is available under CC-BY-SA unless otherwise noted.