We've Been Through Worse

Take the town of Maubeuge

"We've Been Through Worse" is the first campaign mission in Call of Duty 2: Big Red One.

The player starts by an American CP. The player can see lots of friendlies come and go. A new guy named Private Andy Allen is part of Sergeant Roger's squad. Brooklyn seems to be angry at him as he hates replacements. Brooklyn says "Hey look replacement, just because you have that tag on your shoulders doesn't mean you're one of us.." Kelly tells Allen to ignore Brooklyn. A friendly soldier joins the group and says "It's hell out there guys. The whole division of SS has moved into there area and they aren't giving up those crossroads.." and gets interrupted by Delaney. Delaney explains the situation and orders the player's squad to move down the hill along with other allies. The squad moves out. An enemy Stuka crashes on the ground, nearly hitting the player. Now that the player is by the buildings, enemies and an enemy tank appear. The tank gets destroyed by a friendly Sherman. The squad then goes into the building. The player sees some wounded friendlies there. After that, the player arrives at the river. There are lots of Germans on the bridge, so the player has to take out as many as they can. A friendly tank moves in, but gets destroyed along with the bridge by a Stuka dive bomber.

Allen calls the player and the squad goes into the building. When the player gets outside, there are multiple Germans in the buildings right across the river that have to be killed. The squad moves to the left, and the player can see an enemy tank across the river. Brooklyn tells the squad to hold up until the tank reloads. When the tank reloads, the player has to run towards the building in front of him. A friendly tank and more friendlies appear. The tank gets destroyed. On the bridge, there is an enemy tank. It gets damaged, but its cannon remains active. The friendlies will try to destroy it with Satchels, but they get taken out by an MG42. The tank shoots the building next to the player, leaving only a crater behind. The player has to then get in the building and get upstairs. The player see an MG42 and then has to use it to destroy the anti-air cannon. After that, Allen will kick some planks out of the way and the squad goes to the bridge. Two friendlies then get shot on the bridge by a tank shell. Brooklyn tells the player to plant a Satchel. After the fireworks, the player has to take out the MG42 in the building in front of him. Take out the other German in the building. After that, Brooklyn tells the player that friendly bombers are on their way to bomb the city. The squad will throw a red smoke grenade so they won't get bombed. After the nice view, Germans begin assaulting the squad. The player must defend the position. After some shooting, Allen will get shot and the player will get hit by a mortar shell. Brooklyn will come to his aid and yells for a medic. The player passes out and the mission ends.

Main article: We've Been Through Worse/Transcript

Start of the Mission. 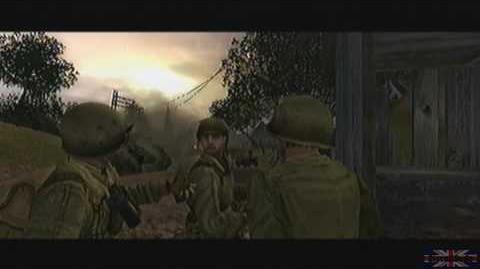 Retrieved from "https://callofduty.fandom.com/wiki/We%27ve_Been_Through_Worse?oldid=2539609"
Community content is available under CC-BY-SA unless otherwise noted.