Call of Duty Wiki
Register
Don't have an account?
Sign In
Advertisement
in: Call of Duty: Modern Warfare Remastered Multiplayer 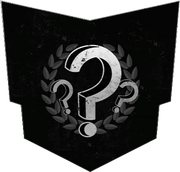 Weekend Warfare is a special playlist set featured in Call of Duty: Modern Warfare Remastered that is available for players during the week. The playlist features previously unavailable gamemodes in Call of Duty 4: Modern Warfare or gamemodes with rules that differ from the conventional style of warfare, such as restricting usage of a certain weapon. The playlist was added on January 20th, 2017[1].

"Kill players with your grenade launcher to advance to the next weapon. first to get a kill with each weapon wins. No parties."
— Gamemode description.

Added on January 20th, 2017 and taken off the playlist January 23rd, 2017[1], Gun Game - Launchers is a derivation of the usual Gun Game game mode, where players are only allowed to use underbarrel Grenade Launchers to progress through the ranks. To ensure this, weapons are given no ammunition apart from their respective grenade launchers. The player will rotate through all the assault rifles, the RPG-7 and the Gravedigger three times in a game apart from the MP44, as the MP44 is unable to be fitted with an attachment. Kills with the Gravedigger do not demote the killed player. The rotation of the weapons are similar to the "Launchers" setting in the Private Match version of Gun Game. Gun Game - Launchers was released a second time on April 8th, 2017[2] and was taken off the playlist on April 11th, 2017.

Added on January 27th, 2017 and taken off the playlist January 30th, 2017[3], Shotguns and Pistols is a derivation of the usual Mosh Pit game mode, where players are only allowed to use Shotguns and Pistols. All perks, melee weapons and grenades are allowed. To ensure this, classes containing any other primary weapon are restricted from being used. Default classes also contain the M1014 and W1200 shotguns, as well as different perk sets. The game modes featured within this Mosh Pit are Team Deathmatch, Kill Confirmed and Hardpoint.

Shotguns and Pistols was released a second time on March 3rd, 2017, taken off the playlist on March 6th, 2017[4]. This variant added Domination to the rotation of game modes and restricted the usage of the perks Frag x3 and Special Grenades x3. However, default classes still contained these perks. The game mode otherwise is exactly the same as the original counterpart.

Damage and Health was released a second time on June 9th, 2017, taken off the playlist June 12th, 2017[6]. This iteration was identical to its original iteration.

Added on February 10th, 2017 and taken off the playlist on February 13th, 2017[7], Streaks Confirmed is a derivation of the usual Kill Confirmed game mode, where killstreaks are only awarded to the player via collecting enemy dog tags, as opposed to just killing the enemy. The UAV and Helicopter killstreaks are also disabled, causing the Airstrike killstreak to be awarded after collecting three enemy dog tags.

Streaks Confirmed was released a second time on June 23rd, 2017, taken off the playlist June 27th, 2017[8]. It was identical to its original iteration.

Added on February 17th, 2017 and taken off the playlist February 20th, 2017[9], Oldcore is a hybrid of the Old School and Hardcore gamemode modifiers. Gameplay is identical in objective to Old School gamemodes, but with the added modifier of Hardcore.

Added on February 24th, 2017 and taken off the playlist February 27th, 2017[10], Hardcore Domination is a combination of the Domination gamemode and the Hardcore game modifier. Gameplay is identical to the core version of Domination, except with the addition of a respawn delay.

Hardcore Domination was released a second time on April 21st, 2017, taken off the playlist April 24th, 2017[11]. This variant removed the respawn delay. The gamemode is otherwise identical to its original counterpart.

"Snipers Only. No Juggernaut."
— Gamemode description

Added on March 17th, 2017 and taken off the playlist March 20th, 2017[17], RPGs Only is a derivation of Team Deathmatch which restricts usage of all weapons, equipment and perks except for the RPG-7 and Sleight of Hand perks, which are automatically given to the player once the match starts. Players also experience unlimited ammo with the RPG-7, as well as increased jump height and health similar to that found in Old School Modes. RPGs Only was also featured as one of the possible modes in the gamemode Beach Bog 24/7, from June 27th, 2017 to August 1st, 2017.

RPGs Only was released for a second time on August 11th, taken off the playlist August 18th[18]. It was identical to its original iteration.

Added on March 24th, 2017 and taken off the playlist March 27th, 2017[19], Slasher is a derivation of the Infected game mode which restricts usage of all loadout options except for the Gravedigger which is automatically given to the Slasher and the last survivor, and an M1911 .45, which is given to all survivors but can not be used to damage the Slasher, instead used to slow the Slasher. Much like Infected, the goal is to survive the round by avoiding the player chosen as the Slasher. Unlike Infected, however, players do not become Slashers once they are killed, and are instead forced to spectate once killed. Survivors are able to damage the Slasher, but will not be able to achieve this task easily unless they are the last survivor left. The gamemode also features increased jump height similar to Old School Modes. Survivors are awarded 100 XP if they are alive once a fellow survivor is killed or every 10 seconds.

Slasher was also involved in a vote with Prop Hunt to add it into the game permanently. Prop Hunt won however, and was made a permanent gamemode.[25][26][27]

Added on March 31st, 2017 and taken off the playlist April 3rd, 2017[28][29], Prop Hunt is a gamemode inspired by the popular mod of the same name which was available on the PC version of Call of Duty 4: Modern Warfare. One team assumes the role of hunters while the other team are random props. Each prop has a chance to change their prop to another random prop twice and has the ability to flash once in order to make a getaway. Periodically, the prop team will "whistle" every 20 seconds. The hunting team is armed with a P90 and a Desert Eagle, both with unlimited ammo, as well as a Knife. All props are given Dead Silence. At the start of each round, each hunter is "blindfolded" for thirty seconds, allowing the props to hide. Each round the teams switch roles, with each round lasting a total of four minutes. The first team to get three victories win the game. The original maps compatible with Prop Hunt are Pipeline, Backlot, Ambush, Crash, District, Downpour, Vacant, Crossfire and Strike.

Prop Hunt was released subsequently on April 28th, 2017 to May 1st, 2017[30][31], May 26th, 2017 to May 30th, 2017[32] and June 30th, 2017 to July 7th, 2017[33]. These iterations featured numerous changes from the original version, including the addition of a prop killcam, which shows the location of one of the currently alive props with a similar setting to game-winning killcams if the props win that specific round. Props also no longer regenerate health, and are awarded 100 XP periodically for staying alive, similar to Slasher. Hunters are also given a single stun grenade for use against props, however this stun grenade does not slow down props, and only displays a hitmarker if props are in the blast radius. The third iteration added Bog and Showdown to the map rotation. The fourth iteration added Shipment, Beach Bog, Chinatown and Broadcast[34][35] to the map rotation, featuring an altered rule set for Shipment containing Old School style movement and magazine sizes, one prop change, a 10 second blindfold timer as well as the hunting team being given RPG-7s with the perk RPG-7 x2 alongside the usual gear.

"Get the enemy flag and return it to your base."
— Gamemode description.

Added on May 12th, 2017 and taken off the playlist May 15th, 2017[36], Capture the Flag was released with a very similar ruleset to previous iterations, such as a respawn delay and a round score limit of three captures. Flag locations are placed in the same locations as Sabotage bomb site locations.

Capture the Flag was released a second time on August 4th, 2017, taken off the playlist August 11th, 2017[37]. This version changed the respawn wave delay of 7.5 seconds to a flat 2 seconds per player.

"Beach Bog Prop Hunt only. One team hides as props in the map and the other team must find them."
— Gamemode description.

Added with regular Prop Hunt on June 30th, 2017, taken off the playlist July 8th, 2017[33], Beachcomber is a gamemode operationally identical to Prop Hunt, however the map Beach Bog is the only one in rotation.

"Teams alternate in attacking and defending two bomb sites, both of which must be destroyed by the attacking team equipped with bombs."
— Gamemode description.

Added on July 21st, 2017, taken off the playlist July 28th, 2017[38], Demolition was released with a very similar ruleset to previous iterations, including the two round score limit, static spawn point, overtime functionality and the multi-bomb feature, however also adding a rule restricting the use of the perk Frag x3. Bomb locations are not the same as Search and Destroy locations for balancing issues.

Demolition was released a second time on September 8th, 2017, to September 15th, 2017[39]. It was identical to its original iteration.

Added on August 18th, 2017, taken off the playlist August 25th, 2017[40][41], Mad Props is a gamemode that takes the usual Prop Hunt gamemode formula and reverses the roles, in which the props must locate and kill the humans. At the start of the round, the prop team is blindfolded for a full minute to allow the human players to hide. Once the time is up, the props are given a 10 second invulnerability to prevent spawn killing. Props are given three lives whilst humans are given only one life, with props changing after every successive death. Props are given the perks Stopping Power and Extreme Conditioning, as well as an ability to explode at will to kill a human player, a full second after a whistle. Humans are also able to create and choose a custom class, unlike Prop Hunt. Mad Props features a score limit of three, or a tie after four rounds, each round being won by either all humans being killed or all props being killed. 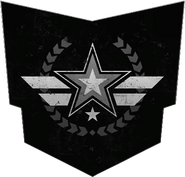 The original icon for Weekend Warfare.

The promotional image for Prop Hunt.

The promotional image for Capture the Flag.

The promotional image for Prop Hunt and Beachcomber modes.

The promotional image for Demolition. 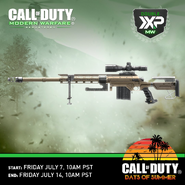 The promotional image for Snipers Only during Days of Summer. 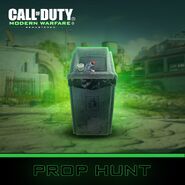 The promotional image to vote for Prop Hunt. 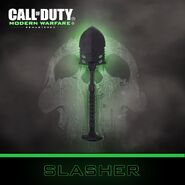 The promotional image to vote for Slasher. 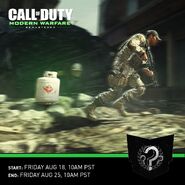 The promotional image for Mad Props. 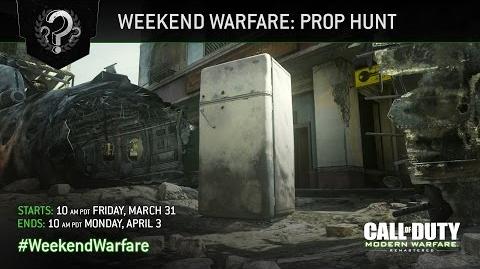