Who's Who is a Perk-a-Cola in Call of Duty: Black Ops II in the Zombies game mode, first introduced in Die Rise. It costs 2000 points. The perk allows players to revive themselves after they are downed. If downed, the player will take control of a doppelganger that can be used to revive the player's downed character or any other downed player in the match. If players successfully revive themselves or if another player revives them, they will keep all perks and equipment they had before they got downed apart from Who's Who. The color of the perk is dark blue(sometimes seen as teal or turquoise), and the icon is two hands reaching for each other.

If the player does not revive themselves before they bleed out but is still alive as the doppelganger, they will become the doppelganger but will lose all perks and equipment leaving them with only the M1911. Perks and weapons can be bought while playing as the doppelganger. The double will spawn close to, but not near enough to see the player's body and will only have a M1911. If both the original player as well as the clone are down simultaneously, then their teammates will need to revive both in order to revive the downed player. In solo mode however, being downed as the doppelganger counts as the death of a player, thus ending the game. In case of the player's body being killed in an action such as falling down an elevator shaft or off the map, the player will respawn again in the default spawn room with no perks and the M1911, maintaining their points.

In Call of Duty: Black Ops Cold War, while not physically in the game, the perk's attributes are combined with Tombstone Soda which turns the player into a shadow in the Dark Aether armed with their weapons when downed, allowing the player to revive themselves.

Die Rise - in one of two elevator shafts once the power is turned on. Either the shaft down the hall from the initial spawning area, or in another down below. The location varies between games and the machine shares the spawning points with the perk machine for Speed Cola.

The appearance of the Who's Who Perk-a-Cola machine resembles a figure similar to a body, possibly relating to the secondary organism that is created when the Perk is used. It also has a Life Preserver around it, possibly due to the fact that the perk is mainly used to revive the original player. It also has a strange orb on top of the machine, with a hologram of a man reaching his arm out.

The Who's Who machine in Die Rise.

Uncapping the Who's Who bottle.

Drinking the Who's Who. 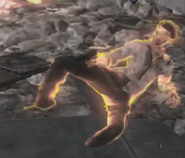 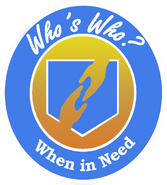 Emblem of Who's Who.